Weird moment for me today at a local store: a store I enjoy, depend upon, appreciate. I was there to buy some birthday cards, and I was gobsmacked to see them selling a shamelessly, painfully anti-Muslim card. The inside of the card reads simply "I honestly want to wish you a happy birthday," which is nice, but the "honestly" is only a joke if the speech on the outside of the card is explicitly anti-Muslim: 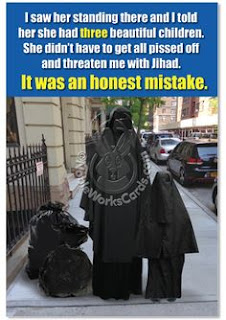 See, it's funny because it'd be awesome to tell a woman wearing the hijab that it means she's garbage. It wouldn't actually be "an honest mistake," because you meant exactly that equivalency.

Here in Canada today, a major university had to evacuate three of its major buildings due to bomb threats against its Muslim students. Last night, a mosque in Toronto was set ablaze by an arsonist. If you want a somewhat longer list, Vice can help you out with that.

I'm an atheist, and I have little sympathy for followers of any religion, in their fantasies of enlightenment and divinity and whatnot. I'll tolerate them, as long as they're at least theoretically open to alternatives of various kinds, and of course most of them -- most of you -- aren't.

The enemy is intolerance, and so I took the card to the cashier with the things I wanted to buy. "I'll take these things," I said, "but this one ... I'm not sure what to say, so I'll just say that I'm incredibly disappointed in [insert name of store here]." And I rambled a bit, because I was uncomfortable, and she was pleasant and young and attractive, but eventually I reasserted my disappointment and stopped talking.

She said carefully that many people who work at the store feel much the same way about the card. However, she also said that the card is a very consistent seller: "one of our best sellers," she said.

So, I'm incredibly disappointed in the card's manufacturer, Noble Works Cards; in the store that's selling it (which I'm not naming just yet); and most of all in the store's customers, most of whom are my fellow inhabitants of Cadboro Bay and the UVic community.

I'll go back to the store tomorrow, get contact info for the management or owner, and follow up. More updates as circumstances warrant.
Email Post
Labels: british columbia canadian politics