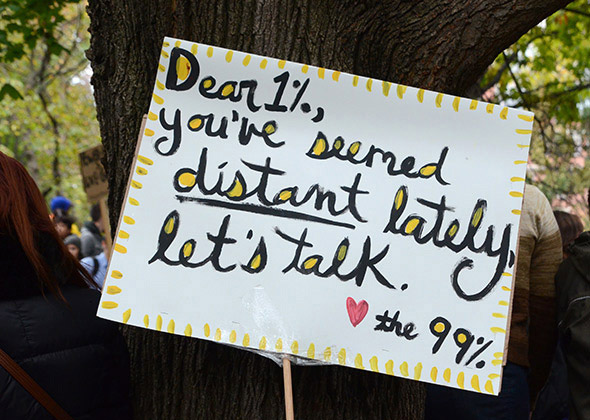 Predictably, I've been of many different minds about aspects of the Occupy movement. I attended my local movement on October 15th, and I've wandered by twice since, but I'm not planning on camping out. Obligations, you know, too many of them about which I feel too strongly to set them aside for this.

But I've also gotten cranky about some of the comments I've been seeing online, particularly by people whose opinions I thought I knew enough about to predict their politics. Some of this, I should say, comes from an exchange with local reporter and man-about-journalism Murray Langdon, opening with his tweet the other day of "If #ows wants to target overpaid individuals, occupy #NBA arenas and #NFL stadia. Forget town squares." He's a good guy, Murray, and I understand his frustration with the movement (both his personal frustration and what I take to be his frustration as a journalist), but I found myself ... provoked.

So for good or ill, I've found myself unable to avoid attempting something of a manifesto-style response: feel free to determine the appropriate hand signals with which to respond at each point.

These are huge issues, and effective responses to them would require significant changes by (or at least on behalf of) millions upon millions of people. I don't expect that camping for a few weeks will make much happen, but the Occupy protests are a signal, a call, a loud and sustained principled objection. I'm ecstatic that people are objecting, and that the system appears to be listening. I'll not improve my mood, at bottom, until the system appears to start taking the objections seriously - instead of simply responding to the inconvenience itself of having people in the town square - but it's a start.

I am the 99%. So are you. You have different ideas than I do? Great. Bring it on; I get excited at the prospect of changing my mind to something better!
Email Post
Labels: politics

Fraze said…
We're both married, and so we are both aware that a nit-picking focus on the illogical details of any angry reaction ... isn't going to make the anger go away.

In fact, if I find myself pointing out that my wife's anger doesn't have any coherent demands, then I think I've lost the argument already.

Couldn't that perhaps be said for the people complaining about OWS? A protest this widespread and this heartfelt is notable — and the fact that it isn't even protesting a specific, highly-visible single instance of injustice is even MORE remarkable.
October 24, 2011 at 10:23:00 PM PDT

And Fraser, yes, certainly. The opposition to OWS and Occupy Elsewhere does at times savour of the "but if you squeezed the toothpaste a little harder, I think you'll find...." Eventually we'll all have to move toward fixing the broken, straightening the bent, hanging the toilet paper roll the correct way, and so on, but for now the important thing is simply that someone recognizes that sleeping on the couch is the foreseeable future. We'll deal with the details once the 1% figures out just how unhappy we are about those glances at the waitress.