Meekly, I disagreed a few weeks ago when a friend and fellow blogger used the film version of Where the Wild Things Are as the starting point for comments about How Hollywood Ruins Everything. He's not wrong in principle, in fact I've been saying much the same thing to anyone who'd listen since I first shaded into feckless adolescence, but I think he's wrong in this specific case. I want to talk here about the Dave Eggers novel The Wild Things, but I need to start with the movie anyway. 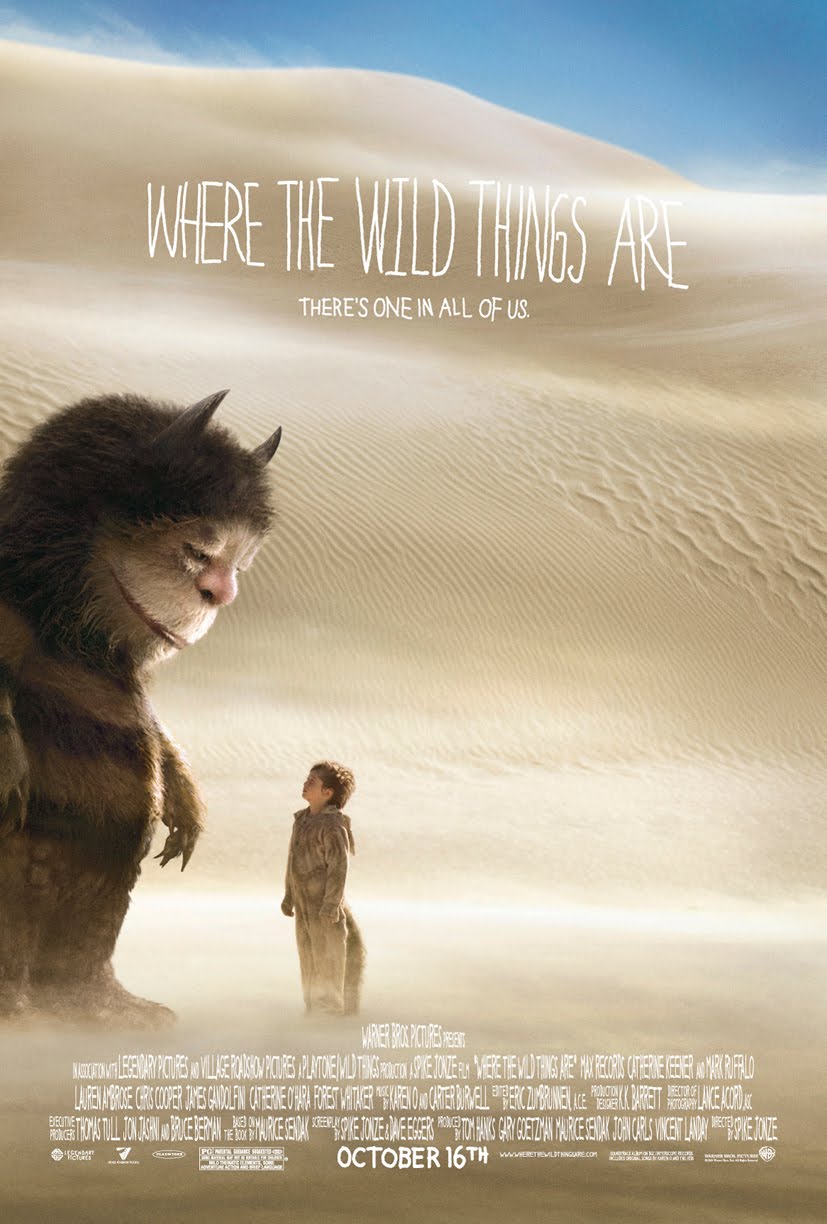 Where the Wild Things Are, by Spike Jonze, from a screenplay by Jonze and Eggers, made with the blessing of Maurice Sendak, is not a movie version of the beloved children's book. It's a return to the book by adults who loved it, who look back with mixed fear and amazement at their childhood selves, and who reflect anxiously on the relations they imagine between themselves (or other former WTWTA kid readers) and their current, future, or imagined children. It's not about childhood at all, in other words; it's about parenthood.

(And if you've got proof otherwise, I don't want to hear it. I do literary studies -- don't muddle me with what the author might have meant for me to understand! Plus an unofficial transcript of the movie is here, if you want it.)

Peter Travers disagreed with me in Rolling Stone, seeing it (I think) as a kids' movie like no other, but still a movie for and about kids: he loved it, though, in some of the same ways that I did, which was reassuring.

But then there's also this novel, released by McSweeney's initially in a genius fur cover. It could have been a novelization of the movie, since it was written after the movie was filmed, or of the Sendak book, since that's Eggers' primary textual reference point, but it's neither of those things. It's a novel, with pre-existing analogues in the forms of the movie and the children's book. Given Eggers' involvement with the screenplay, it makes sense that there'd be close parallels with the movie, and indeed there are, but there are also some useful divergences, such as in terms of the narrative arc and of the described setting. Max is in the boat for longer in Eggers' novel, lava flows just under the ground in the novel (not in the movie), and Eggers gives you all sorts of fantasy nature elements in the novel, such as "a many-colored meadow. The grass there was long, soft, and arrayed in a patchwork of clashing colors--ochre and black and violet and fuchsia" (p.176). In most cases, I thought these extended and intensified the movie experience of defamiliarization, where I recognized my own childhood and world as profoundly different from what I thought at the time they were.

The complicating factor of the novel, though, is that (like the movie) it's simultaneously for kids and NOT AT ALL for kids. The language is mostly simple, the characters' level of self-reflection is mostly pretty low, and the storytelling is mostly of the "and then, and then" variety. But the events are at times horrifying, the implications are philosophically dense (though merely, if that's not the wrong word, about childhood experience), and there's only some hints at resolution. An unfriendly adult reader will not enjoy this novel, because it's too childish for an adult reader and too prickly for a kid; an unfriendly kid reader will not enjoy this novel, because it's neither formulaic nor productively unconventional.

Everything Eggers does (can I say "everything"? Hmm) seems to come from a good heart: his TED Talk about schools; his volunteer program for student writing, 826 Valencia; even his fund-raising pirate supply store. Hipster irony, maybe that's one of the things that infuses his books, even if he's been insisting ever since A Heartbreaking Work of Staggering Genius that it's not irony: "to refer to everything odd, coincidental, eerie, absurd, or strangely funny as ironic is, frankly, an abomination upon the Lord. (Re that last clause: not irony, but a simple, wholesome, American-born exaggeration)" (Mistakes We Knew We Were Making, p.33). What was I saying? Oh, right. Hipster irony, maybe that's part of the schtick: but it's also an intimate, feeling-filled book. I don't know whether you'd like it--certainly there are some people I expect to dislike it--but would the kid you once were want to take a chance on something that might be amazing?
Email Post
Labels: american environment fiction review

Fraze said…
Thanks for the shout-out!

Although now I'm going to have read this novel too, before I can disagree with you. And then what happens if it turns out I was wrong and wind up agreeing? Oh it's all so complicated. Why couldn't I just be a dogmatic Twilight fan?
February 29, 2012 at 9:09:00 PM PST

richard said…
Yep, it's a shout-out! No, you don't have to read it, unless you want to, and it's a very fast read if you cave and want to take it on.

richard said…
Hmm. The newest Google changes to Blogger hid the hyperlink on "I have": I was linking to http://boughtbooks.blogspot.com/2010/07/stephanie-meyer-twilight.html
February 29, 2012 at 10:05:00 PM PST