Pulp fiction is amazing stuff, with its plots spinning barely under control, and its images zipping past in an unnecessary profusion, and word games played seemingly just for the hell of it.

Except when it isn't amazing. And then it's slow, and it staggers along, and the joke's on it rather than on all those people too self-assured to bother with pulp fiction.

So no, I didn't enjoy Edgar Rice Burroughs' Tarzan at the Earth's Core nearly as much as I wanted to. It's an amazing concept, the hollow Earth in which Burroughs set his Pellucidar sequence, but eventually, it seems, the only option left was ... Tarzan. At this point my favourite in Burroughs' Pellucidar sequence remains the fifth novel, Back to the Stone Age, and I needed to read the Tarzan novel before the fifth one fully made sense, but Back to the Stone Age stands out even more now that I know exactly where it came from. The series' second novel, Pellucidar, worked well and kept me excited, and Tanar of Pellucidar was a really good successor to Pellucidar, but Tarzan at the Earth's Core, well....

I'm just starting At the Earth's Core, where it all began, but the first three novels' trajectory is basically this:

At which point ... Tarzan? Really? 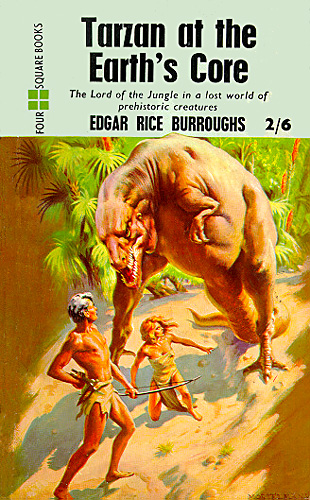 I know, I know, don't think critically about pulp fiction, or you're failing to meet it on its own terms, but sometime that's harder than it should be, and sometimes it's mostly the novel's fault.

I don't remember anymore who Paul Mather was referencing in the title of his play Beaten to Death by Gorillas. However, the booklet given to Fringe-goers at its premiere explained that an actor once groused that his movies (almost invariably set in jungles) were being built on thinner and thinner plots: eventually, he predicted, the script would just have him walking through a clearing only to have gorillas drop from the trees and beat him to death. The movies remained entertaining, and he continued to do the job that was asked of him, and the public kept buying tickets, and yet the job had been diminished through careless formula from something inconveniently smart and entertaining -- pulp fiction -- into "man beaten to death by gorillas." A different kind of pulp fiction, one might say.

Or maybe I'm just not enough of a Tarzan aficionado. Maybe if I came to this novel from Lord Greystoke's narrative universe, I'd feel better about it. Certainly there's a different voice to this novel from the Pellucidar novels, and it's a voice that I associate with the Tarzan novels (though it's been 25 years since I last read one of those), so maybe that's the key issue for my failure to enjoy the novel as many of its readers clearly have. And for the record, I bet that readers of the recent graphic novel adaptation are loving the graphic novel, and I bet I'd enjoy it as well. Dark Horse is a very cool publishing house, and it was an inspired choice to go for Tarzan at the Earth's Core. Amazingly, you can even read online the original 1931-32 newspaper strips that serialized this novel!

In the other novels, there were these political and cultural questions that functioned not unlike symbolism to sustain a sense of depth and disquiet beneath all the flash you expect from pulp fiction. This depth meant that the wildly complicated plots were basically fine -- who cares if every third person you meet is the sibling of someone else you already know, when it's all coming together like this? -- but without something to keep you thinking, the complexity starts to seem like a contrivance.

I hope to enjoy At the Earth's Core, and certainly I'm not going to hold this one novel against Burroughs enough to downplay his achievement otherwise in this series, but I'm a little bit resentful about Tarzan at the Earth's Core.

Fraze said…
I love you, man!

I really feel like I'm with you on this pulp thing, even though you're an incredibly abstruse intellectual, and I'm just a guy with more pencils than average.

But we're in the same key here — the book isn't bad because it lacks a Lacanian sense of play, or a legitimate postcolonial subtext, or a deconstructive ethical scaffolding.

It's bad because it sucks.