When I was a kid, I read and loved all kinds of older books that reflected different perspectives and places than my own: Clair Bee's novels about all-American sports hero Chip Hilton, Thomas B. Costain's historical novels (especially The Silver Chalice, mysteriously), even Charles Dickens' Pickwick Papers, which wound up in our house for no reason that I now recall. 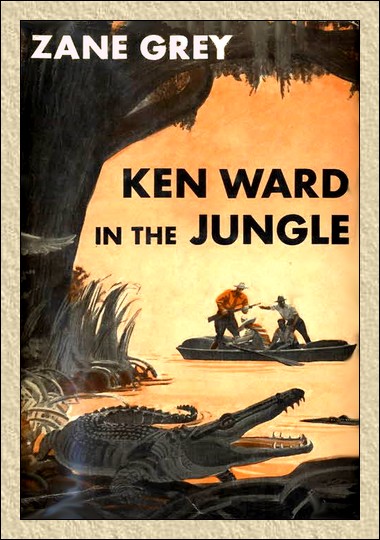 But above all the rest, unaccountably, was Zane Grey's 1922 book Roping Lions in the Grand Canyon, a largely autobiographical novel about some time that Grey spent with four rangers in the American southwest. The subject of this book -- stay with me, as the plot summary will get tricky -- is roping mountain lions. And they rope them -- this is the tricky part, honestly -- in and around the Grand Canyon.

Sorry, that sounds like mockery, but it's only because for the life of me, I still can't account for my fascination with this book. I haven't read it in more than 25 years, but my old copy is downstairs, and I think I'm going to read it in the next few days. Recently I've been thinking hard about books that have stuck with me over the years, so it's long been in the plan, but the time is suddenly now.

On a whim, this morning I retrieved Grey's earlier (ie, 1912) Ken Ward in the Jungle out of my TBR mountain, and damn it, now I've got to reread Roping Lions in the Grand Canyon, because it's all just so awesome. I'm hardly the first person to find Ken Ward in the Jungle both inspiring and amusing, in fact I learned of the novel's existence from a friend I respect who felt the same way about it, but sometimes it's enough just to testify. Book reviews? Well, I guess I write some reviews here at Book Addiction, but there's a whole lot of testimony and rambling, too, maybe more of that than of anything else.

Incidentally, while Roping Lions is autobiographical, Ken Ward in Ken Ward seems to have gone through many of the experiences Grey documented in Roping Lions, as Ken and his brother Hal repeatedly reminisce about Ken's own experiences roping lions in the Grand Canyon. The lion book was published 12 years after Ken's, mind you, but apparently many of the lion incidents were earlier covered in the 1908 Last of the Plainsmen, a biography of Buffalo Jones, and then in the 1911 Ken Ward novel The Young Lion Hunter, so ... recursivity FTW, and hang everything else. Summary: Ken Ward, still a very young man, indeed a boy in the opinion of his father and the hardbitten nouveau explorers/colonists of southern Mexico, travels with his younger brother Hal to Tampico, in order to map 100 miles of whichever thus-far-uncharted river he decides to follow. Hijinks ensue, plus manly exploits, a certain amount of coming-of-age, and numerous near-death experiences.

Why the apparently quixotic mission? Well, if Ken's mapping job is good enough, his uncle has promised to send him on a European vacation, a hunting trip to Africa, and a fact-finding pilgrimage to Germany in order to learn forestry in the country which at that point had been practicing it for 300 years. (It's more impressive in the novel, but it's still a wildly nerdish desire. Only two years before the outbreak of the Great War, it's also enough to give you some pangs at everyone's naivete.) Plus, a successful trip will mean the uncle's support for Ken's exploration of the ruins of Yucatan. Meanwhile, young Hal is determined to prove himself a naturalist, which in 1912 involves a staggering amount of slaughter, with embarrassingly powerful armaments.

The brothers are accompanied on their expedition by a local man, Pepe, who had had a great reputation before falling for alcohol, and a young American man named George, who works in Tampico but is on holiday for unexplained reasons. Pepe and Ken are doubles of each other, taking turns running things except that Pepe's at a linguistic disadvantage plus inexperienced with the American technology, while Hal and George are doubles of each other as well, except that George is an incompetent hunter and hence not to be trusted with much of anything.

I wish I could call the novel empty-headed fun and call that a recommendation, because that's how I'd mean the phrase, but I'm not sure you'd believe me. I wish you would, though.

Academic readers should spend some time with this sort of book once in a while just to remind themselves of some of the forms taken by colonialism, and readers of popular fiction owe it to themselves to understand something of the tradition in which their favourite recent novels participate, so it's not impossible to find a "Take your vitamins" rationale for reading Ken Ward in the Jungle.

But honestly? It can feel really good to relax into someone else's worldview, and not to worry until later about the politics etc. of that worldview. I guarantee that Ken Ward's worldview isn't yours, but he's a well-meaning guy doing interesting things. Argue with him later. For now, try just to enjoy a drink with him, and appreciate the stories -- the legends, Grey thought they might become, though they faded away like the dust jacket of this (justifiably?) forgotten novel.
Email Post
Labels: american environment fiction review