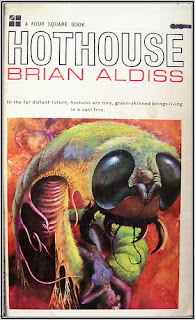 There's all kinds of fascinating fiction out there about the end of humanity, with different kinds of terms for the discourse about it: human extinction, Dying Earth, Last Man, that sort of thing. I'm going to have to dig into the different terms much more carefully than I've yet gotten around to, if next year I get to teach the course on this that I expect to. For now, let me say only that these kinds of novels provide some seriously useful perspective that we ought to be drawing on when we think about climate change.

The back cover blurb, from my 1964 edition from Four Square:


The sun is going nova.

Its red disc hangs immobile in the sky, showering one half of the Earth with powerful radiation. A fantastic banyan tree covers the sunny side, and in its huge interior the descendants of human life fight their last desperate struggle for survival. Gone is man, the master of Earth: in his place is a small, puny, defenceless creature that has to spend most of its waking hours avoiding giant insects and other deadly traps that threaten its life.

In this inferno of eccentric destruction is Gren, the born rebel, who embarks upon man's last great adventure.

Or as the front cover put it: "In the far distant future, humans are tiny, green-skinned beings living in a vast tree."

In Hothouse, there are virtually no surviving insect species, birds, mammals, or reptiles: plants have thrived, and they've taken over the assorted ecological niches currently associated with all those other species. Termites, ants and humans are roughly the same size, for example, and not only is there an approximate truce between them, there are some possibilities for sentient communication between them. Theories of the so-called "Great Chain of Being" were terribly unsettled by the discovery of insect-eating plants like the Venus Flytrap, since insects were supposed to eat plants, and higher species shouldn't naturally be the food of the lower (except in a recycling sense, for corpses).

The earth has stopped rotating, too, since it's effectively tide-locked with the Moon (also now non-rotating), which means that the Earth simply has a light side and a dark side. So many millions of years have passed that really, the planet's light side is entirely covered by a single banyan tree engaged in marginal turf wars wherever there's a significant difference in terrain or climatic conditions: salt water, snow, volcanos, and so on.

And the novel (somewhat disjointedly, with a dramatic plot twist about the evolutionary origins of human intellect) follows the adventures of young Gren as he tries to make his way in this new world.

What compromises does a person make for individual survival, what's the bottom line for the various things that we think make humans human, what changes in the world would represent tipping points for what we think of as survival: all these questions, and more, are eddying around the background behind the present moment in which Gren's actions occur. With my perspective more attuned to climate change now than it was when I first read these kinds of novels, more than twenty-five years ago, I'm finding that I'm unable to focus entirely on each novel's present moment: I'm constantly distracted by (interested in?) the relationship between the represented alternative present, and the unrepresented present from which I'm reading.

None of Hothouse's scenarios looks anything like a short-term outcome for climate change, obviously, but what less dramatic changes might flow from the projected changes? As Ursula Le Guin and lots of other people have said over the years, science fiction is a wonderful thing to think with - thought experiments, basically - so I'd like to see more readers, of all stripes, including the snootier brands of academic readers, to spend more time thinking with SF about climate change.

I'm hoping to see a whole lot of people doing just this kind of thinking with me next year at UVic: ENGL 478, 2013/14, and I'm hoping to mildly MOOC-ify it, too.
Email Post
Labels: environment fantasy fiction international review science fiction speculative fiction