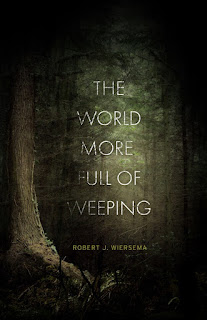 I'm an avowed fan of Rob Wiersema's novels, as I've said more than once. He's got the chops to write literary fiction, for whatever the hell that's worth, but clearly he'd rather write something that affects his readers. Before I Wake offered up an intimate portrait of a collapsing family, trying to stand around a seriously injured child; Bedtime Story blends high fantasy (swords! magic! arcana!) with a realist novel about a father's love for his damaged son; Walk Like a Man is a great mix of memoir with music commentary.

Now that I've read it a third time, I can say unequivocally that The World More Full of Weeping is one of my very favourite novels: technically it's a novella, shut up with your definitions already, seriously, shut up, but it does a great deal more with its 70 pages than I need a novel to do before I call it successful.

Brian Page, the 11-year-old son of recently divorced parents doing their best, is missing in the woods, and the whole town of Henderson's out looking for him. Thing is, he might not want to be found -- and he might not even be missing, at least not in the way the grown-ups understand the term. The novel's title is from the Yeats poem "The Stolen Child," which naturally means that we're in the realm of matters possibly mystical, but it also means that we're immersed in a natural world with an absolute claim on our attention.

Reviews of the book were a little tepid when it came out, which was so very unfortunate. The publisher, ChiZine, describes itself as specializing in "surreal, disturbing dark fiction," and Amazon housed TWMFoW in its horror dungeon, so reviewers eagerly following those signs quite correctly said that it's not at all a horror novel, and hence found it kind of disappointing (not "kind of disappointing BECAUSE I WAS MISLED," which would've been closer to accurate). Reviewers less eager to follow those signs, though, seem nonetheless to have read the novel in terms of those signs anyway, rather than just reading the novel on its own terms.

In The World More Full of Weeping, Wiersema retells the classic fairy tale about a lost child; finds magic abroad in the land; worries about first love, whether abandoned or pursued; and shares the experience of a man fearing the complicated loss of his son. It's not that there are multiple storylines here, or that the novel savours of multiple genres (the desperate reviewer's Hail Mary), or that it's unfocused or flawed or overstuffed or whatever. It's that The World More Full of Weeping is a full, rich, tiny novel that just HAS to make a rising Hollywood director some very good coin one of these years.

And that's even before you get to Wiersema's fine essay on writing about hometowns, "Places and Names": worth the price of admission, all on its own, in its reflection on the freedom and frustration of adapting real places into fictional simulacra.

I teach in an English department, and we recently had a retreat (the horror! the horror!) to speculate on our future. Early on, we heard from some recent graduates about their experience, and each of them said that they'd been worried as first-year students that English classes would ruin their experience of reading. That we'd wreck their ability to love even the books that they already loved. These students came through largely unscathed, in that respect at least, but if you have a friend who used to love to read, but has fallen away from the One True Path, you owe it to your friend to buy this book as a remedy.

Yeah, I'm a fan, and Rob's attended our book club a couple of times, so I'm not uninvolved personally with this review, but if it's not clear already, this is a book I can't recommend highly enough.

If you buy the novel after reading this review, and you don't love it, I'll buy it from you. Period.
Email Post
Labels: book club british columbia canadian environment fantasy fiction review speculative fiction west coast