Was ever the end of the world so calming? 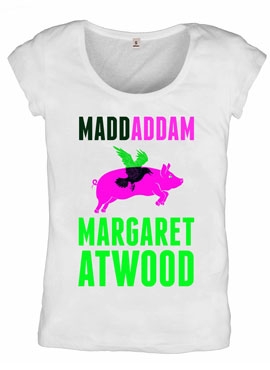 Except for the last few chapters of MaddAddam, the novel with which Margaret Atwood concludes her trilogy of the same name, this novel occurs within striking distance temporally of the events in Oryx and Crake and The Year of the Flood. This makes the three of them much more of a piece than they might have been, with many of the same characters recurring, so it's helpful if you remember what happened with the earlier novels.

Honestly, I don't think there's any point to reading this novel if you don't read the others first. There are a few pages of "The story so far" at the beginning of MaddAddam, but it's barely enough of a reminder for those who've read the other novels. Too many mysteries, if this is your entry point to the trilogy: you'll enjoy it, but it won't have the weight or the warmth that left me appreciating this novel so very much.

Probably the key line for me was Toby's speculation about whether Pilar (who died in an earlier novel) ever believed what she said about whether we can speak to the dead. In the end, Toby recognizes, it doesn't really matter:


however dark, a darkness with voices in it is better than a silent void. (p.154)

MaddAddam, more than Oryx and Crake or Year of the Flood, is a novel about literature, which will of course delight the SF Atwood-naysayers no end. (No, it won't. They'll hate it.)

Or at least, it seems in some lights to be about literature, to the point that I started wondering how much there is in common between Graham Greene and Zeb, since Atwood herself has some things in common with Toby. Really, though, this is a novel about community, and about how community can survive the extinguishing of that community's light. Given that this particular community might be the last human community (maybe, who can tell, no spoilers here), Atwood's exploring whether human extinction is really the end of the human: and what the end of this particular iteration of human culture might look like, from after the collapse.

It's cheerful, that's the maddest thing about this novel: it's funny, to the point that I laughed out loud, no lie, at the exchanges between Toby and her Craker audiences. Atwood only gives us Toby's side of the story, but she gives us exactly enough that we can imagine how the Crakers are responding, because of how Toby gets dragged off-track from her stories. They want to sing, they have questions, sometime they start crying: it's like what happens when I tell stories around here!

My favourite part, as it will be for many readers as shallow as I am, was the mythology that has to develop around the powerful spirit Fuck, after someone influential swears in front of the Crakers:


He could be in many places at once. If you were in trouble and you called to him--Oh Fuck!--he would always be there, just when you needed him. And as soon as you said his name, you would feel better. (p.164)

I know, not that funny here, but in context, and with the extra gravy that Atwood loads into the scene, it's brilliant.

For me, MaddAddam was a thoroughly satisfying conclusion to this trilogy. Was it the best novel, or the most enjoyable? Not sure, but I don't care. Loved it.
Email Post
Labels: canadian dystopia ENGL 478 environment fantasy review science fiction speculative fiction UVic