One of the world's great know-you're-alive foods is a really good peach, straight off the tree, soft enough you worry it might be overripe, but instead a fuzz-covered gushing orb that's sweet enough to trick you into thinking you've got taste receptors on your teeth.

And I say that as someone who in the early 1980s once participated in accidentally picking 250 pounds of peaches at a U-Pick orchard when we meant to stop at a hundred, they were that good. 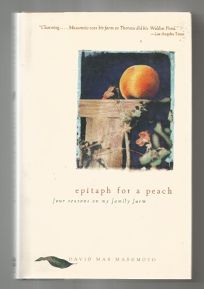 David Mas Masumoto's Epitaph for a Peach: Four Seasons on My Family Farm, like the best peaches, is worth your time in every conceivable way. First appearing in 1987 as an essay in the LA Times, the book was published in 1996, which was around the time I first found it. Two decades later, the book reads as beautifully as ever.

One of Masumoto's strengths is his willingness to confess his incomplete knowledge in such a way that a reader can recognize both the knowledge and the movement toward knowledge. This book documents Masumoto's attempt to preserve an old but delicious peach variety from obsolescence, caused by its short shelf-life and fragile flesh, and so we get to watch Masumoto spending a year exploring his soil, failing at marketing, and connecting through labour with his family, but always thinking about might be the right next task. By the time of the book's completion, Masumoto has spent a number of years moving toward lower-impact methods, closer to organic farming, so he has a lot to say about cover crops, weeds, migrant workers, and competitive farming.

It's a joy, for me at least, to walk his orchards, prune the trees, fall from ladders, and I can't imagine a reader who wouldn't find something to love here.

But then again, I was distracted throughout by the California drought. Masumoto mentions drought a few times, talks regularly about irrigation and fog and storms, and mentions casually at one point that droughts are hard on farmers because they don't get the bad-weather reprieves from hard work:


"The years of continual drought have almost killed me. These months are filled with monotonous days of clear skies. Each morning begins with a work list and the expectation that most of it can be accomplished. I don't have the weather as an excuse to slow down." (p168)

What would the balance be now, I wonder, in how Masumoto would talk about drought and labour, in terms of obligation toward the land?

(Please check out the update from NPR, too, about what has happened with Masumoto's family over the last twenty years. Some very good news there!)
Email Post
Labels: american environment nonfiction review west coast