Let's get the phrasing right: "misery acquaints a man with strange bedfellows."

We're more used to the idea that politics makes strange bedfellows, a line written first by Charles Dudley Warner, but that's a later adaptation. Shakespeare in The Tempest brings together in a terrible storm a shipwrecked jester, Trinculo, and the beastly Caliban. Trinculo sees no alternative but to hide under a cloak being worn by a sleeping man with "a very ancient and fish-like smell," and so with dyspeptic resignation, Trinculo complains that "misery acquaints a man with strange bedfellows." 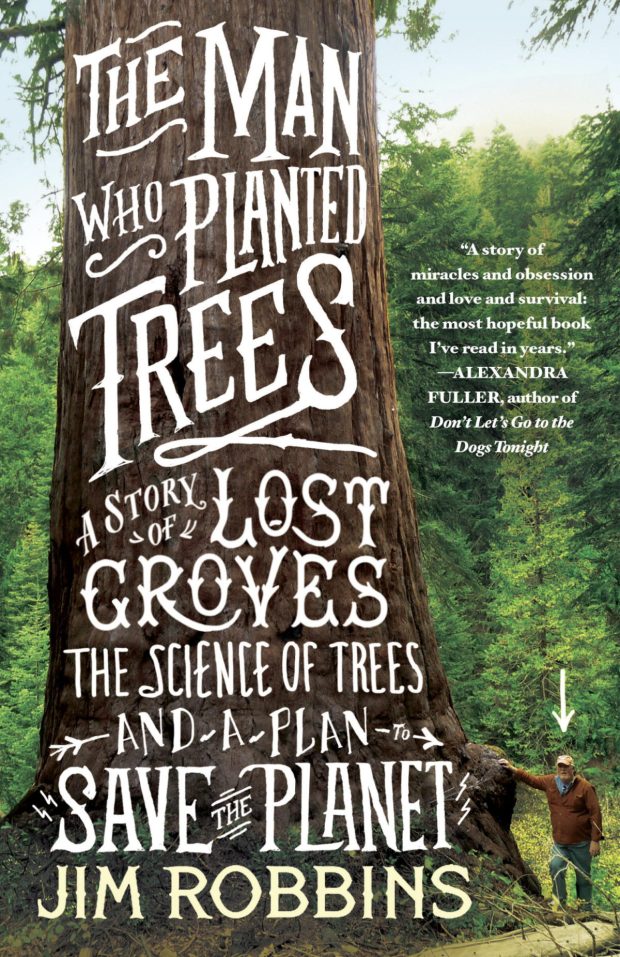 Living in the shadow of anthropogenic climate change certainly counts as misery, and the ecologically inclined do find ourselves at times, at least temporarily, on the same side with people whose ideas we'd rather be able to object to for their strangeness. In a nutshell, that's almost exactly the case with David Milarch, the protagonist of Jim Robbins' recent book The Man Who Planted Trees: A Story of Lost Groves, the Science of Trees, and a Plan to Save the Planet. (No, not the older book of the same title, nor the movie neither. Keep up, people.)

Millrace's self-appointed mission is to collect and propagate the genetics of the largest specimens of the world's trees, from white oak to willow to Sitka spruce to sequoia, through cloning. He's driven, genuinely driven, by a sense that climate change will exert such a terrible force on forests and individual trees that all these species need to be propagated again from the oldest, largest, tallest examples, on the principle that these are genetically the strongest examples.

Biologically he's barking up the wrong tree. For one thing, he's relentlessly focused at any one time on one member of only one species, and forestry biologists recognize that trees grow best and function best within an ecosystem. For another, he's not taking into account the realities of acres-wide single mycorrizhae feeding all the trees within their ambit, salmon carcasses dragged into the bush and abandoned by absent-minded grizzlies, persistent seeps feeding trees lucky enough to have sprouted there, or a myriad other details.

Robbins remarks on some of these things, too, but cuts Milarch a lot of slack:


Libby [a U California emeritus professor of forestry and genetics] was talking about a tree's rhizosphere--the vast complex root system and the soil and the microorganisms affecting, and being affected by, the roots. It's a large ecosystem unto itself and is far more complex than the tree aboveground. (p.95)

More simply, "Nothing that the human enterprise does can come anywhere near the elegance and efficiency of a robust global forest" (p.139). Without a system complicated enough to attain this elegance and efficiency, the tree can't thrive spectacularly, whatever its genetics, so even if these are the strongest survivors of each species (which they're not), their genetic expression is severely restricted by its being severed from its system. Milarch's heart is in the right place, though, but things are weirder than just this wish-fulfilment version of forest biology.

See, he started pursuing this mission because of a near-death experience: not just a brush with death, but the full "floating above the body", "going into the white light", "surrounded by angels", "sent back with a job to do" NDE. I'm an atheist, so Christians make no sense to me except as a form of social control (ditto the rest of you believers, frankly), and this kind of revelation makes my eyes roll. More specifically, I'm deeply uncomfortable with links between ecology and spirituality, and so I don't know what to do with Robbins' attitude toward Milarch:


people like Milarch are often regarded as flakes. They aren't flakes, though--they're on to something.... Is David Milarch's story true? After much doubt, and after talking with others who have had near-death experiences, I came to believe him. (p.83-84)

So. I'm proud that humanity has produced David Milarch, who's willing to pursue a mission that even his sometime believer Jim Robbins calls "quixotic" (p.206), and I think that his project is potentially useful: in a big-tent view of things, it's a project I'd like to see added to the toolbox, to the Ark, however we want to think of all those many things we're all doing to keep the world running recognizably.

I think his science is misguided, his inspiration a hallucination, and his faith a fiction, and so to be blunt, he's a seriously strange bedfellow. But you know, I guess I'm in bed with him anyway. Things are miserable. Wouldn't you agree, friend Trinculo?
Email Post
Labels: american environment nonfiction review