There's nothing in this book.

Nothing reaches out occasionally, or looks up, or passes through the poems of Nicholas Bradley's collection Rain Shadow. As "Glacial Suite" has it, "Nothing, woken, / crawls over the lip / to the ice field.... / / Nothing is suspended, weightless" (p.6). 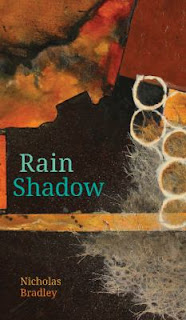 As such, Rain Shadow is something of a classical book of poetry: its forms and phrasing will be familiar, perhaps welcome, to readers with a taste for Ammons, Jeffers, Kizer. For me, it fits easily into my shelf of place-aware, place-engaged, self-examining literature from the North American West:


What's wrong? Routine paranoia.
Drought in California. The coming shake.
The shittiness of the world that will last
until the world ends. ("Cancer magister," pp.68-69)

I'm pretty shameless about how much my reading focuses on this part of the world, but just to be clear, I mean this as high praise, rather than somehow limiting. Romanticism's roots delved deeply into the culture here, both complicating and complicated by colonialism and the frontier mythos. Its particular evolution and rupture here speaks of a deep interchange with European literature, and with the Eastern part of the continent, and it's no small feat to write convincingly out of that tradition while still making your verse sound fresh and vital.


And the book's vitality will be more important to most readers, too, than the academicky details that I can't help thinking about. Poems like "On Corporeal Existence" and "In Praise of the Mountain Pine Beetle" are going to stick with me for a while, particularly their gripping closing lines, and it should be said that Bradley has a real knack for the potent ending. His final lines simultaneously turn his poems and sprout from them, meaning that each piece in this collection tugs you to stop a minute before you move to the next page. From poems other than those cited above, for example: "let the feathered / augury fly" (p.89), or "Have fun / out there. Don't die. Not yet" (p.58). He slips between registers with ease, blending humour with story with reflection, and the reviewer's desperately overused escape term "readable" fits so well here.

I'm not seeing many reviews of this collection yet, but hopefully they're on the way. The book's first poem (then entitled "Mount Rainier Twice in a Day") was a worthy finalist for the 2014 Walrus Poetry Prize, and if you don't trust the commies over at the Walrus, just go and read "Some Goats" over at Roll of Nickels. There's wonderful stuff in this book, and even though you'll think on first look that you've already sussed the thing out, these poems reward multiple readings.

There's nothing in this book, and that's everything.

(Also, Nick's office is just down the hall from mine. I know his speaking voice, and can hear it in the poems, but I bought the book on my own initiative and haven't talked about it with him. So there.)
Email Post
Labels: british columbia canadian poetry review UVic west coast