If I ran things in my university literature department, I'd run a boutique course in environmentally inflected BC literature, with different books rotating through in different years. Were I to be so lucky, Gillian Wigmore's novella Grayling would be a perennial feature (alongside such other novellas as Winter Wren by Theresa Kishkan, and Robert Wiersema's The World More Full of Weeping). 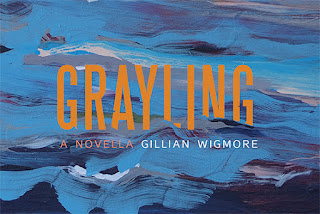 Briefly, this is Jay's story, except that it's also Julie's, unless it isn't.

Jay is an ill-prepared and poorly equipped solo canoeist on the Dease River, both recovering from and running away from having had a non-cancerous tumour "the size of a peach" removed from a testicle (p.66). There's a very real chance he might die on the river. He's not deliberately seeking that outcome (although death drive? testicles as root of all evil?), but in his ignorance and self-centredness he's scarcely able to avoid whatever might happen to him.

Julie ... well, spoilers abound, there, so I'm not sharing any details. If it's a realist novella, and it might be, then her transit through the book illuminates Jay's fallibility, possibly to illuminate the heteronormative, toxic-masculinity, ultimately impotent roots of the settler hunger for dominion. If there's something of the fantastic here, and there might be, then she's a mirror to him and to Wigmore's readers, and she exceeds the trajectory that she appears to trace in the novella.

This is fiction grounded intimately in a specific place, with plotting that's credibly unbelievable enough (WTF? But ... WTF?, I kept thinking) that its readers have honest work to do in order to make peace with it all. Canoeing isn't something I know, and the Dease River is outside my reach, but this is a novella that helps you learn your way into perceiving the world--and the represented world--with a greater care.

In other words, I loved it.

In terms of reviews: I don't think Joy Parks read the book, certainly not with any care AT ALL, so ignore hers; MAC Farrant didn't quite get it, but almost; and Theresa Kishkan's in the Malahat Review is (characteristically) almost perfect.

NB: I should say that I've admired Wigmore's writing for some time, and you should read it all. Her 2007 poetry volume Soft Geography was just terrific, and her 2017 novella Glory (which followed Grayling) is wonderful as well.
Email Post
Labels: british columbia canadian environment fiction review west coast