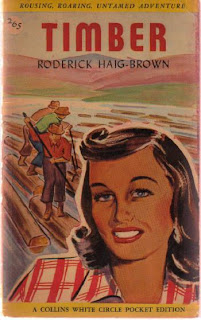 Now this, THIS, is a book to marvel at: Roderick Haig-Brown's 1942 romance novel Timber. Sure, it was rereleased in 1993 by Oregon State UP's Northwest Reprints Series, with an introduction by Glen Love and a manly cover photo of loggers, but you don't get the full effect if you don't read the Collins White Circle Edition, with full-on pulp-fiction cover art and blurby goodness!

It's the story of young Johnny Holt and his best friend Slim Crawford, plus Slim's cousin Julie, a good girl who kind of wishes she was bad, and their evolving fates inside the British Columbia forest industry through the 1930s: blacklists, union drives, coroners' inquests, and technical lingo like no other romance novel you'll ever read. The whole first chapter is taken up with testimony at a coroner's inquest after a man was killed by a log during the loading process on the camp train, including a juror who doesn't understand the terminology and has to keep asking for clarification. Make it through that, and it's pretty clear sailing.

Unless, that is, you're surprised by what I assume is unconscious homoeroticism like this passage, in which Johnny reflects on his pal Slim:

Last night and this morning he had been kidding all the time, his red mouth twisted with that smile and his blue eyes looking at you from his smooth, evenly brown face. Slim was like a swell-looking woman sometimes; brown curly hair, always lighter in summertime just above his forehead, where he pushed his hat back; long, round chin, full lips and straight nose. It was good to look at him. But he wasn't like any woman you could ever come near, or any soft woman. Just his face was like the faces on woman statues sometimes are. His hands were big, long-fingered and wide, and there were long hard muscles in his forearms and shoulders, across his back and on his flat belly. It wasn't right to think Slim was like a woman, except for his face sometimes and when he talked sometimes. (p.35)

And a few pages later there's a shower scene, just after a fistfight, in which a character ponders the differences between men's bodies. I found it a bit distracting, because it's not clear to me what's gained by this particular form of self-awareness in the characters, seeming almost to gender attention even to one's own body, but fascinating nonetheless.
Email Post
Labels: british columbia canadian environment nonfiction review west coast