Pellucidar: the fertile imagination of Edgar Rice Burroughs found room inside the Earth's core, on the other side of a shell consisting of just 500 miles of crust, for an entire world carpeting the inside of our planetary sphere. I haven't had any luck yet finding an Ace SF Classic edition of the first volume of the series (#156, At the Earth's Core), but I think I've got all the other volumes now.

Pellucidar, the series' second book, opens in classic adventure-story mode: a prologue meant to blur the boundaries between the representation and the real. In brief, we open with Edgar Rice Burroughs receiving a letter from a man who'd read At the Earth's Core as fiction, and yet who in Africa just a few years later found what appeared to him incontrovertible evidence that it was in fact a True History. Burroughs hastens to his side, in a very civilized gentlemen's club in Algiers, and in consequence the entire volume of Pellucidar is the transcription of a hair-raising tale transmitted via telegraph from inside the Earth's core.


In brief, David Innes seems to have escaped / departed Pellucidar at the end of the first novel, but Hooja the Sly One (his arch-nemesis) managed to kidnap Innes' mate Dian the Beautiful, who he'd planned to take with him to the Earth's surface. Innes had thought Dian the Beautiful had been in his escape vehicle, but too late he discovered that Hooja the Sly One had managed to replace her with a Mahar he'd expected would kill Innes. Innes survives, he returns to Pellucidar with the Mahar, and he roams throughout Pellucidar -- surviving many a dramatic incident -- in search of Dian, in pursuit of Hooja, and in dreams of reinstating his once-mighty but now-fallen First Empire of Pellucidar.

(Note: My first introduction to this series came via Back to the Stone Age [discussed here], and while it's fine to read that one out of sequence, methinks Pellucidar should almost certainly be read after At the Earth's Core. Once you've read either of these, then it's fine to read anything after them, in any sequence, but I needed more background than Pellucidar gave me on its own.)

Mahars, incidentally, are the dominant species in Pellucidar; they evolved intelligence first, have developed numerous large cities, and raised an army of Sagoths (what Burroughs refers to as "gorilla-men"). They're basically a very large winged amphibious reptile that prefers nonetheless to live underground, but they don't have auditory organs; the Sagoths are apparently the only other species in Pellucidar able to send and receive their fourth-dimension, sixth-sense communication.

Right. The back story is that David Innes and Abner Perry, an older inventor generally referred to as "good old Perry," arrived somehow in Pellucidar provisioned with a limited range of modern conveniences, and immediately set about civilizing the savages in order to build a truly modern empire, with none of the dross and scandal attached to modern life on the Earth's surface. Since the humanoid Pellucidarians (ie, the non-Mahars) somehow had never invented even the bow and arrow, Innes and Perry were like supermen, and in consequence their empire grew rapidly, requiring of its members peace and forgiveness and communitarianism (within a powerfully monarchic structure, Innes appointing as a King the leader of each one of the innumerable Pellucidarian tribal groups within his empire). This empire having risen to stability, and the Mahars' dominance distinctly weakened, Innes decided to return to the surface with Dian the Beautiful. (This is where I wish I'd read the first volume first....)

In this volume, Innes and Perry have to rebuild the empire. In Innes' absence, the empire has fallen apart through the machinations of Hooja the Sly One, who has managed to use the disappearance of Dian the Beautiful as motivation for renewed warfare between the peoples of the empire, and during this conflict the Mahars have resumed their attacks against the humanoid Pellucidarians. He needs to find his way through the horrors of predators (cave bears! glacier bears! sabre-toothed tigers!) and villains (Mahars! Sagoths! allies of Hooja!) back to friendly ground. Once there, he needs to demonstrate that he remains a potent potentate, so to speak, in order gradually to knit the tribes back together. Once the tribes are again an empire, he needs to vanquish Hooja's hordes and the Mahars, once and (almost) for all. Once peace and freedom reign, well, the book can end safely, with the printing press introduced to the illiterate world of Pellucidar. 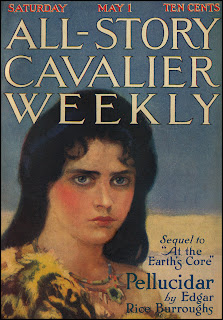 So many things have to be left out in a review as brief even as this bloated thing, but let's talk warfare for a moment, specifically gunpowder, cannons, and ships. There's a deep, unresolved tension in this book between praise of war and hatred of it. You can't go more than a few pages without someone dying or being killed in one horrible fashion or another, and yet once Perry and Innes snatch victory from the jaws of defeat, Innes more or less chastises Perry for turning the empire (in Innes' long mid-book absence, NOT the outside-the-book absence) into a war machine: he tells Perry that up to that point, they've only brought the worst of the Earth's surface to Pellucidar, and while Perry was right to pursue any means necessary to obtain a lasting peace (by which Innes means rescuing Innes himself), it's time to turn swords into ploughshares and cannon-forges into printing presses.

I'm looking forward to the first volume, so I can figure out a little more nuance to the empire. I'm guessing there are going to be some really interesting differences between the two instances of empire, because the first one seems to have been intended as a corrected version of Earth's colonial structures, and the second seems to have been a newly corrected (further corrected?) version of the first one. Great stuff, though, whatever the relations between them: no closer to quitting reading the series!
Email Post
Labels: american environment fantasy fiction review science fiction speculative fiction west coast