You can keep William S. Burroughs: I'll choose Edgar Rice Burroughs every time, and wish that David Cronenberg would adapt some of Edgar's work, not just William's. I've been reading Burroughs a fair bit lately (here and here), and that's going to continue for the near future because his Pellucidar series is way too entertaining for me to give it up now. 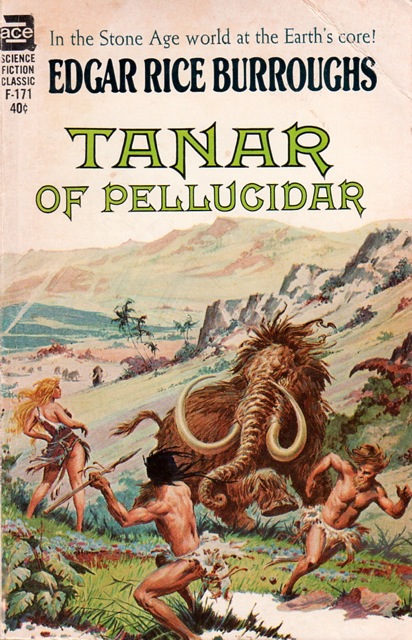 A caveat, though: I will never ever be quite one of these people. Taking a suitcase of Tarzan books to Africa, and leaving single copies hidden in different places, would be kind of a neat ironic postcolonial performance art project, but....

Anyhoo, Tanar of Pellucidar is the third novel in Burroughs' Pellucidar sequence, though "sequence" might be too strong a word for these related texts. The first four of them occur basically in sequence, but a couple of them are harder to connect to the rest. In the case of this novel, Tanar of Pellucidar is the third book of the four-novel series opening with At the Earth's Core and closing with -- I'm so excited I can barely type the words, since I just bought a copy today at Russell Books -- Tarzan at the Earth's Core.

Like Pellucidar, this third novel also opens with a real-world prologue in which Burroughs connects with a reader who doesn't want to stop thinking of the novels as fiction, but finds himself forced to. Whereas in Pellucidar the telegraph is the technological intervention through which the inner Earth contacts the outer, in Tanar of Pellucidar there's a connection via radio: not over the usual radio waves, but "Gridley waves," a Burroughs invention named after one of his characters. Burroughs spends most of the prologue talking with young Jason Gridley, who like Burroughs lives in the California town of Tarzana (a real place, now inside metropolitan Los Angeles, named after Burroughs' own Tarzana Ranch), and Tanar of Pellucidar is meant to represent a transcription of a tale told by Abner Perry by radio through the Earth's crust, from Pellucidar.

The impressive young Pellucidarian warrior Tanar finds himself on the run in this novel with -- and sometimes in pursuit of -- the beautiful Stellara, with David Innes and a few others seeking to rescue Tanar from his predicament. At the outset of the novel, the empire of David Innes (established in At the Earth's Core, destroyed off-stage after that novel, re-established in Pellucidar) is stable, but odd reports are coming in about a troublesome, previously unknown people called the Korsars: a seafaring people fond of cutlasses, brightly coloured head-scarves, and cursing, and reliant on large cannon-equipped ships with multiple decks. Korsar, Korsar, what word does that sound like ... could it be ... Corsair?

Yep, they're pirates, descended from pirates from the Earth's surface who somehow made it into Pellucidar through a hole at the Earth's pole! David Innes and Abner Perry, you may recall, entered the Earth's core in the first two novels with a huge burrowing machine that digs its way through the 500 miles of crust, so this other mode of entrance is a very big deal in plot terms, even though it's not foregrounded in Tanar of Pellucidar. Innes is thus exceptional not just because he didn't just fall through a hole into Pellucidar, but because he managed to generate an empire rather than a xenophobic nation: good colonialism, really, rather than bad.

Much of the novel occurs on, or in relation to, two islands, Amiocap and Hime. On the first, people act according to the principle of love, but on the second, no one can be trusted, and love is absent where it's not irrelevant. Burroughs' novels often emphasize processes of colonization and control, but there's also always this pull toward the human scale, and these two islands -- and the two beautiful young women who represent them -- are manifestations of very human impulses. If the novel had been written much later, I would've wondered if Amiocap was meant to be California, and Hime somewhere in the eastern USA, but since it's much too early for even a proto-Summer of Love reference, I'm not quite sure what's behind Burroughs' islands. Maybe Hime as Europe, Amiocap as America?

Pirates, romantic love, military operations, cannibals, dungeons, prehistoric predators: there's just so much to enjoy here that I can hardly stand it, though of course your eyes keep rolling at persistent occurrence of what one hopes is badly dated gender and racial politics. Keep repeating to yourself that this novel (like the others) is a product of its time, and you'll be fine: you can read critically even when you're reading for pleasure, and don't let me hear you say otherwise.

In the figure of Tanar, Burroughs makes a Pellucidarian the centrepoint of his novel, whereas most of the others in the sequence have at their centres a civilized man from the Earth's outer surface. It's fascinating to me that the next novel in the sequence sees Burroughs bringing his surface uber-hero Tarzan into Pellucidar, rather than sticking with Tanar or choosing a different Pellucidarian hero, but I haven't started that one yet. Apparently I have actual employment duties I have to fulfill. What's up with that, anyway?
Email Post
Labels: american environment fantasy fiction review science fiction speculative fiction west coast