Daniel Coleman, In Bed with the Word

An hour from home, six hours from our destination, my great-uncle looked back over the burgundy velour front seat and asked, "So, have you made a decision about having Christ in your life?"

Now, this was an ambush, pure and simple, not the continuation of an earlier conversation. Our nuclear family didn't have Christ in our lives, and the great majority of my extended family made no room for him/Him either: church was for weddings and funerals, and both Christmas and Easter were secular festivals of Black Magic chocolate boxes. Not long after listening to Uncle Jim's tapes of sermons for half the trip to Vancouver, I found myself in a Coles Books not long afterward, stumbling upon and buying Nietzsche's The Antichrist at 14, and I've been a confirmed atheist ever since.

But like a lot of readerly folk, I've nevertheless maintained a vexed relationship with the idea of god. I deeply respect the idea of community that's embodied in church life, and for a time I quite enjoyed the company of a particular United Church congregation (in which my former spouse had grown up). I'm regularly impressed by the devotion to learning shown by many religious people, and by the fundamental practice of applying theoretical principles to the complexities and vicissitudes of daily life. There's no god in my life or my imagination, or in my understanding of the universe, so a church will never be a home for me: I'm comfortable with the philosophy and the process of reason behind that statement, but I'm also aware that there are ways in which it can feel a lonelier path than the path of faith might be.

If this was a review outside this blog, I'd talk only about the book, but my house, my rules. And besides, it's important to me that you understand just how compelling I found Daniel Coleman's new book In Bed with the Word: Reading, Spirituality, and Cultural Politics. It's a book about reading spiritually, about reading spiritual texts (though not only those), and about reading from and for both the spirit and the Spirit. This atheist loved it, frankly: I read it twice back to back, which is something I just don't ever do, and I've read it a third time in the month since buying it at the ALECC conference in Kelowna (for which, again, many thanks are due to Nancy Holmes and her organizing team!). It's not for everyone, In Bed with the Word, but those who appreciate it are likely to find it easy to imagine becoming a touchstone.

The great paradox of reading is that you are profoundly isolated when reading silently, lost in a good book as Jasper Fforde's novel puts it, and yet you're engaged in the act of strengthening your membership in the reading community -- in the culture to which you belong, wish to belong, or might in future belong, depending on your circumstances. Coleman takes this paradox as the starting point to this book, more or less, then links it to what feels to me like a somewhat idiosyncratic definition of spirituality:

a drive or energy in ourselves that is outward-reaching, that is a kind of longing to be meaningfully connected. I mean what finally moves us, what propels our actions and sparks our imaginations. I mean a recognition of ourselves as connected to others, to the surrounding world, and -- within or beyond the sensory world-- to the Creator. (p.9)

Cut the Creator reference, a deletion about which Coleman wouldn't be at all pleased, and I'm excited about this definition. Longing, meaning, imagination, connection: these terms are easy to use within a spiritual conversation, but harder to use in a deliberately atheist context, where intellect and reason get the bully pulpit. I found very appealing the genuine warmth in Coleman's approach. As he puts it, "The desire to read emphasizes a basic generosity toward the Other that is the condition of all language" (p.14): we read, or at least we can read, in order to get along. 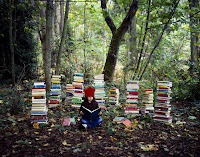 And Coleman's interested in a particular kind of getting along, too, and it's the same kind that motivates most of my efforts both professional and personal. As he argues in the second chapter, contemporary commodity culture is a culture of speed, distraction, restlessness, anxiety, and externally cultivated internal dissatisfaction. Resistance is difficult precisely because it's so easy to find yourself marooned by the roadside, outside of and irrelevant to the culture you want to critique or resist. In Coleman's view, though, the very act of reading is structurally a moment of resistance, "mainly because it requires quiet time, being slow and meditative, and it is active rather than passive, being imaginative and dialogical. These qualities run in the opposite direction from the one in which Western culture is heading" (p.26).

There is, quite simply, a relief to not being restless, and reading is among the few cultural activities that cultivates a deep version of this relief.

Coleman has a great deal else to say in this slim, little volume, especially about the valuable subjects of vulnerability (to which we so willingly open ourselves up in the act of reading), sadness (especially what he calls "the pleasure of devastation"), and absence (in a Derridean sense of language on the one hand, and in the isolation/community paradox on the other). His excursions through Augustine and Derrida, in particular, are all on their own worth the price of admission. But you know, I could burn as many words on each of those items as I've already put into this post, and as great as my readers are, there aren't many who'll make it to this conclusion as it is.

So let me end with something I said above: In Bed with the Word isn't for everyone, but it'll become a touchstone for an awful lot of people. Spiritual readers will adore this book, I think, meaning "spiritual" in its conventional sense as approximately the same as "religious," but non-believing readers who spend some time with it, deliberately vulnerable and open to its conversation, may become its biggest fans. I can't recommend this book strongly enough, to anyone interested in the practice or value of reading.
Email Post
Labels: academic canadian nonfiction politics review