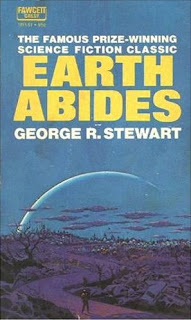 Never trust the press, right, and don't believe the hype? Well, the 1971 cover of George Stewart's Earth Abides (originally published in 1949) has more than its share of hype, referring to it as "The famous prize-winning science fiction classic." All true, as it happens, and frankly all deserved. I really enjoyed this novel, and for good reasons.

That's not to say it isn't a product of its time. Earth Abides detours (albeit briefly) into some essentialist ideas about race relations in the American South, and it's built on some distinctly 1940s ideas about gender roles. Plus it's organized around what I found a very troubling thesis about the depth to which humans are innately governed by an impulse toward mysticism -- Stewart makes the exhaustion of atheism a little easier to take by making smart people dismissive of the mystical, but still. That's not necessarily because of the 1940s, since there's still plenty of new anti-atheist end-of-times fiction being written (like this stuff I'm not planning to read, not ever, good heavens, not EVER).

Most people will have a vague sense for the plot of this book, so I don't think a spoiler alert is necessary before saying that Stewart explores the aftermath of a lethal plague, probably global, survived by only a tiny remnant population of humans and other primates. Other animals are unaffected, so as with Alan Weisman's The World Without Us, and the History Channel's series Life without People, and National Geographic's documentary Aftermath: Population Zero (watch it here), much of the interest has to do with the changes across time, without people rushing about pretending to run things. Unlike those more recent works, though, Stewart's novel follows one man's life from his near-death in its opening scenes through the years that follow: its focus is thus anthropocentric, but the world itself becomes increasingly remote from its past engineering in the service of human needs, and human culture -- such as it remains -- increasingly recognizes that humans are parallel to other species, rather than special.

Isherwood Williams has survived the plague, as have a few other people, but the world takes no notice of them:


The almost complete removal of man, though in some ways an unprecedented earthly catastrophe, had not in the slightest affected the earth's relation to the sun, or the sizes and locations of the oceans and continents, or any other factor influencing the weather. Therefore, the first autumn storm which swept down from the Aleutians upon the coast of California was ordinary and conventional. (p.95)

Or as the book's epigraph has it, "Men go and come, but the earth abides" (Ecclesiastes 1:4).

It's not that there isn't human drama in the novel, because there is, but Stewart is working without fiction's standard isolation motif (ie, to focus on an individual or a small group, alone within or against a larger social group). Extinction is thus available as a motif in unusual ways; that's appropriate for a post-Hiroshima novel, but again this novel isn't about nuclear weapons or warfare or anything depending on the existence of large-scale social organization. It's interesting to think about Ish beside Margaret Atwood's character Snowman in Oryx & Crake, a more recent novel with a remnant human population, but Atwood's more interested in the pre-crash that we're living through, than in the post-crash reality in which her characters exist; I think that's what she was saying to George Strombolopoulos last night, too, but I didn't watch the full interview, and that's how Ursula Le Guin and others have approached science fiction.

More than that, though, and I start to worry about spoilers. Ish's main concern is with rebuilding human culture, and that's an incredibly fascinating aspect to this story. How will he do it, what paths must be rejected and taken along the way, and what will happen to complicate the path? It's far from clear that a happy ending is possible, as you're reading this wonderfully rich narrative, and it's not at all clear that the ending counts as happy. It's satisfying, no question, but "happy"? Hard to say, but I encourage you to assess it for yourself.

For the seriously interested, the blog Exploring the world is attempting to gather the entire worldwide roster of Earth Abides cover photos, including for translations: stop by for a visit! My favourite is definitely the 2004 Spanish edition by Minotauro, even if it's not quite accurate.

awatson8381 said…
In my opinion, Earth Abides is the best post-apocalyptic book written to date. I agree with you that Stewart's race and gender constructions in the book are quite dated, but in a number of ways he's used these cliched tropes to critique mainstream middle America, not blacks and women.

I find Stewart's strength in Earth Abides is on considering how much of our everyday worlds - our comforts and conveniences, our technologies and knowledge - would erode in the years after the collapse of civilization. Other authors, such as Walter Miller Jr., take a much longer view of things, but the effect is not as visceral.

Ultimately, I found the purpose of the story is to question out motivation to build a society the way we have. Given a new set of circumstances, would we do it again? Is it human nature to pursue 'progress' relentlessly?