Is that the last book I'll read purely for fun, before plunging into my four entirely new course preps for the next academic year? Possibly. On the positive side, I find great joy in my teaching, so it's hardly a slog to get through those works -- not that I can speak to my students' experience of them, mind you.

But if it is the last non-work book I read for a while, John Berger's Pig Earth is clearly an excellent place to wrap things up. It's a remarkable book, though strange nearly beyond words, written from and about a recent past that for modern folk like you and me, verged on incomprehensible even when it was occurring. 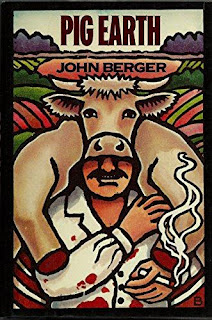 In brief, Pig Earth (published in 1979) is the first volume of Berger's Into Their Labours trilogy, a series of novels collections multi-genre books depicting and commemorating 20th-century European peasant life and peasant labour. As these books are at pains to argue, "peasant" is fundamentally a separate category of human experience; there is no overlap between a money-system worker and a peasant, what we might provisionally call an object-system worker, so there's no ready insertion point into the book's represented lives that'd allow a contemporary reader to connect with them through any vehicle but nostalgic idealization.

Berger's introduction to Pig Earth discusses, among other things, the utter distinction between the peasant and the worker, and the impossibility of a genuine political alliance:


Any transformation of which the peasant dreams involves his re-becoming "the peasant" he once was. The worker's political dream is to transform which up to now has condemned him to be a worker. (p.xx)

In other words, peasants want their lives to remain largely as they've been, or as they were at their best; workers want their lives to never again be what they've been. Given that we seem to live every aspect our lives now under the control of Moore's law, not just the pace at which computer processing speed accelerates, the near-stasis that Berger sees as the peasant's desirable reality makes little sense except as a pastoral, nostalgic escape.

And yet there's nothing "ideal" in these represent peasant lives. Death is nearly everywhere in these pages, and where there's isn't death, there's violence: no one dies of natural causes, not really: animals are slaughtered (which slaughtering is depicted in considerable detail), and humans (human animals?) are killed by other humans or through accidents. They're hungry, these people, not metaphorically but actually, and their symbolic resistance of the encroachment of capitalist monocultures is always thoroughly material as well.

And yet there is a remarkably attractive power in these lives. I'm hardly the first person to think Lucie Cabrol would be an easy women to fall into an uneasily obsessive love with, which might explain the popularity of these three stories' adaptation into the wildly impressionistic semi-dance play The Three Lives of Lucie Cabrol. (Want to watch some high school students have a go at part of it?)

You won't find it an easy book to get into, and you'll probably want to quit before you get through the first quarter of it, but you shouldn't. The three closing stories about Lucie Cabrol cannot hold their full power unless you read the rest of Pig Earth, and you owe it to yourself to read these stories.

If you're having trouble, please, post a comment or drop me an email, and I'll help you through. This book needs to survive.

Google's blog stats are pretty unreliable, I gather, but for whatever reason, my six-year-old review of Berger's And our faces, my heart, brief as photos remains a top-five post every single month, and is clearly my second-most-popular post of all time. And our faces etc has nearly 1.5 times as many views as the third-place post, an 18-month-old review of Jasper Fforde's somewhat problematic Shades of Grey (no no no, NOT that Shades of Grey!), so were it not for what I take to be the largely SEO-driven popularity of Gabor Maté's gripping but terribly flawed In the Realm of Hungry Ghosts, Berger would be BMOC around here. Which is kind of odd, given how vast I feel to be my incomprehension of Berger's writing.

(Maté, though, somehow has six times as many views as Berger's, and almost as many comments as every other post combined, so for whatever reason, it's just not a fair fight.)
Email Post
Labels: environment fiction international nonfiction poetry politics review