Salman Rushdie, The Enchantress of Florence

It's embarrassing, really, just how affected I can be by flamboyantly gorgeous prose. That's not the only thing that Salman Rushdie has going for him in The Enchantress of Florence (love! death! fame! the exotic East! the (oddly) exotic West!), but in this 2008 novel, Rushdie confirmed his place among the very finest stylists writing in this young century.

He'd rather be one of the finest novelists, I imagine, or at least one of the finest fabulists, and he might be one of those as well, but his reputation in those areas won't be confirmed by the relatively slight Enchantress of Florence. (Yes, yes, I know, I know that you can read all over the intertubes that it's Rushdie's most researched novel: these things are not incompatible.)

The plot really is wonderful, veering in the 16th century between India and Florence, myth-making about the Moghul empire, imagining the personal life of Niccolo Machiavelli, celebrating the power of imagination and pure story. These characters, these plot twists, these images: I'm not going to read this novel again, but I'm going to remember it fondly. Here's a single sentence for you, as a sampler:


The emperor Abul-Fath Jalaluddin Muhammad, king of kings, known since his childhood as Akbar, meaning “the great,” and latterly, in spite of the tautology of it, as Akbar the Great, the great great one, great in his greatness, doubly great, so great that the repetition in his title was not only appropriate but necessary in order to express the gloriousness of his glory — the Grand Mughal, the dusty, battle-weary, victorious, pensive, incipiently overweight, disenchanted, mustachioed, poetic, oversexed, and absolute emperor, who seemed altogether too magnificent, too world-encompassing, and, in sum, too much to be a single human personage — this all-engulfing flood of a ruler, this swallower of worlds, this many-headed monster who referred to himself in the first person plural — had begun to meditate, during his long, tedious journey home, on which he was accompanied by the heads of his defeated enemies bobbing in their sealed earthen pickle-jars, about the disturbing possibilities of the first person singular — the “I.” (p.30)

At bottom, for me, it needed to be longer. The Moghul and Florentine sections of the narrative were complicated and unbearably rich with detail, prose as full of beauty as a great Simpsons' plot is stuffed with superfluous gags, but the resolution ... well, I appreciated it. But I didn't like it. 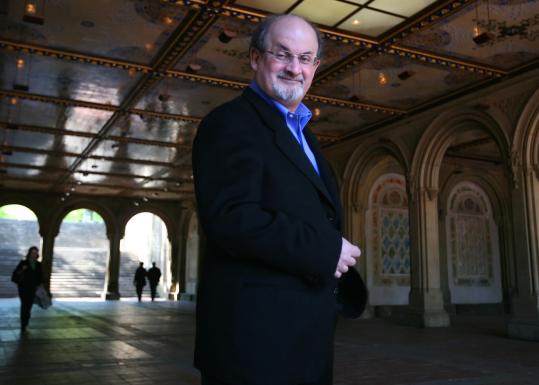 You see, the first 80% of this novel is shamelessly accomplished, it really is. Every character seems maybe more alive than I am; everyone's smarter and more talented and more tragical and happier. (It's kind of like Twitter that way.) The sentences are astonishing, even when you expect them to keep washing over you. The young blond storyteller, who comes to the emperor with a tale mysterious to tell, makes a wonderful alter-ego for Rushdie himself, and the enchantress Qara Köz.

But toward novel's end, the great Akbar rejects Niccolo Vespucci. He denies the power of story, in spite of a life spent among living myths, and in consequence the novel's fabula shrink into exposition. The consequences of Akbar's denial cause his empire to start fading, becoming ephemeral, so it makes sense that when this happens the novel dies a little bit: OK, more than a little bit in my view, but still. There's an artistic purpose behind Rushdie's decision to halt the seduction and hand me a file folder, is what I'm saying.

If you want Rushdie the fabulist, then his best novel is Haroun and the Sea of Stories. If you want Rushdie the novelist, then you want either Midnight's Children or The Satanic Verses. They're gems, all three; you'd love at least one of them, I promise, and when you do, you should read The Enchantress of Florence, because you'll see why there's more to love here than some reviewers thought.