My paternal grandfather, whom I loved enormously, was wrong: every BC bookshelf needed not just the two crucial books he insisted upon (apocryphally, at least), but three. Alongside the galloping metre of the Collected Works of Robert Service and M. Wylie Blanchet's indeterminately fictionalized non-fiction Curve of Time, we should also have Bertrand Sinclair's 1924 glorious mess of a novel The Inverted Pyramid, newly republished by Ronsdale Press. 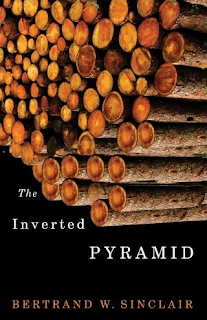 And make no mistake, this is in many ways a mess of a novel. On the formal side of things, for example, characters don't always engage in dialogue so much as deliver unto each other speeches, sometimes multi-paragraph speeches running to nearly a page in length. In line with the novel's handling of dialogue, Sinclair's characters tend toward the representative rather than the real, so to speak. Ideologically, it was at times hard for me to read over the noise of my subconscious shouting, "Where are all the First Nations people, and why do these long-ago Chilcotin warriors keep getting mentioned?"

But it's a product of the early 1920s, etc., both formally and politically. It's a message novel, and the message Sinclair is trying to deliver has something to do with the foundation myths of colonial British Columbia. As such, it's no surprise to see him using the formal conventions of the message novel and responding in kind to the politics in play immediately after the First World War.

In other words, I greatly enjoyed this messy old novel's impassioned denunciations of capitalist consumerism, industrialism, union-busting, and war. Sinclair develops a precise but sweeping attack on those who would start and prolong a war simply in order to make a profit, in effect killing others' children in order to buy more expensive toys; his critique of industrialist looting generally was to me a delight.

This, finally, is a version of British Columbia history that I can maybe identify with.

Except that I can't, not really. The Norquay family attempts something utopian, but however well-intentioned, their ultimate success (such as it is) comes from environmental devastation inside an industrial-scale framework of social relations. Other paths to similar success could have been imagined for the Norquays, though Sinclair would've considered them less realist and hence less viable within his novel: revenge, basically, either judicially or through more underhanded means. Accordingly, I'm left wishing I couldn't remember just enough Ayn Rand to distrust the individualist honour system supported by Sinclair's moral schematic.

(Mind you, I'm also NOT able to remember enough Ayn Rand to be quite sure how Sinclair's ideas map onto hers. And I'm also NOT looking it up. Do yourself a favour, and remain similarly ignorant, okay? Nothing good has ever come from paying sustained attention to Ayn Rand.)

I found this flawed novel, such a product of its troubled times, to be utterly fascinating, particularly the chance to watch a novelist try to wed Wobbly-style sympathies with the worker (including a rousing rendition of the Marseillaise!), with something like a positive proto-Randian hero or Übermensch. Also a romantic plot, family values, and something like tree-hugging. Lots to love here, as well as to distrust and to mock self-validatingly.

In sum, Bertrand Sinclair belongs on a hell of a lot more BC bookshelves than he currently occupies! I'm now scheming ways to force the book club to take a run at one of his other novels....
Email Post
Labels: british columbia canadian environment fiction politics review west coast