Imagine, if you will, a novel from the 1920s, set in the western half of North America. Imagine, more specifically, that it's set in First Nations territory. What are the options for your imaginary author? What's your author going to do with this place's Indians? Is there any chance of winning here?

It's important simply to recognize that there are options, first of all. I'm not necessarily going to recommend Bertrand Sinclair's move in The Inverted Pyramid (hide them! For God's sake, hide them!), but you don't have to go all Zane Grey about it.

Mind you ... some folks do loves them some Zane Grey. Some people even teach his novels. Much to my surprise, there isn't a single hit on Google for "goddamned Zane Grey" (or "goddamn" or even "god damn").

Basically, The Vanishing American is a full-on "noble savage" Western that hyperbolically mourns the demise of the American Indian, specifically the Navajo (or "Nopah," as the novel fictionalizes them, because who needs someone complaining you're describing things wrong?) -- originally published as a serial in the Ladies' Home Journal, of all things.

Indians, as every good liberal knows, are at one with the natural world. Nophaie, the Nopah boy whose abduction first by rustlers and then by settlers opens Grey's novel, "was unconsciously and unutterably happy because he was in perfect harmony with the reality and spirit of the nature that encompassed him" (p5). It's a fairly standard claim about Indigenous lifeways (especially from the painfully naive and from envious wannabes, but never mind that now), if more transparent than usual for a 1920s Western novel. The further you get into The Vanishing American, however, the more you realize that the important element of the above-quoted description isn't the idea of harmony: it's that Nophaie and his fellow Nopahs (and Noki, and Pahute, etc) are both unconscious of ideas and fundamentally incapable of uttering them. The wisdom and intellectual vigour of Nophaie, so central to the novel's development, come in large part from his time among white culture of the Northeast.

Or as Grey has his heroine Marian remark later on, "It was only at a distance that these Indians looked picturesque" (p32). 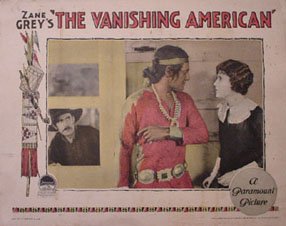 There are, however, elements to praise in this novel. It's impressive and often beautiful, but not every reader will be equally appreciative about the volume of detailed natural description. I live on the unnecessarily verdant Pacific Coast, and BC environmentalists need to spend some time appreciating versions of nature that don't depend on the consistent presence of water, so I can never get enough description of canyons and sage and variations in sandy terrain. Other readers are maybe not so much obsessed as I am.

On the philosophic side, Grey is unstinting in his criticism of structural racism in the American reservation system, which he notes rises generally in the schools to systematic sexual abuse: "Marian inclined more and more to the conviction that the whole government school and reservation system was wrong" (p179). It's often cringeworthy to read Grey's attempts to articulate his opposition through characters' speeches ("meaning well" being about the best one can ever hope for in this novel), but I appreciated his distaste for religious education, for the government's offensive ignorance of its own practices, and for the exploitation of Indian girls by white men in positions of power. White folks like me should feel terribly embarrassed by the ready audience that Grey found for novels like The Vanishing American, but there just might be a baby in all that filthy, filthy bathwater.