Arno Kopecky, The Oil Man and the Sea

How could I not be predisposed, for pun alone, to love Arno Kopecky's The Oil Man and the Sea? The book's subtitle is Navigating the Northern Gateway, too, which is another pun (Kopecky and friend were in a sailboat, see, and they were trying to figure out what's going to happen with the Enbridge Northern Gateway Pipeline, so ... never mind), and so I had no choice.

Plus there's a map after the contents page, with a detailed inset map and two separate keys, so Kopecky was not messing around. 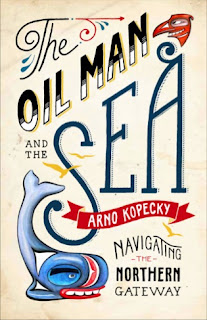 Joking aside, though, this is a seriously enjoyable book. Kopecky keeps bringing moments of humour, flashes of light, and he keeps stepping out of the way so that his cast of characters get all kinds of room to work in. It's nonfiction, so "characters" shouldn't be the right word for the author's informants, subjects, and so on, but that's what they are. During an interview with the indomitable Jess Housty, for example, Kopecky reports soberly Housty's response to one of his queries: "That is the most asinine question any journalist has ever asked me" (p.136)

But behind the humour, he shows tremendous sensitivity to the details that he's handling. For example, when he talks about salmon and the Heiltsuk, he brings together all sorts of issues. He pithily reminds his reader that the Heiltsuk have been in these lands since the glaciers retreated, "ten thousand years, ... in a culture older than Greece" (p.62): there were glaciers then, not rivers, so in fact the Heiltsuk presence pre-dates that of salmon. As a result, they treated potential salmon-bearing streams as if they were practicing something like agriculture, selecting for size, increasing the number of salmon streams, and maintaining the streams themselves for salmon habitat (pp.107-08). It's very much to his credit that Kopecky can help his reader understand the scope of history as well as the separate actions taken over 10,000 years by individual Heiltsuk.

But even with the serious stuff, you're going to get wry, too: "Selling oil to Asia instead of America is now what we mean by economic diversification" (p.183).

In sum, Kopecky has wonderful material to work with, and he handles it with respect, care, and good humour. Even though the Northern Gateway was never built, this book is irreplaceable.
Email Post
Labels: british columbia canadian environment nonfiction review west coast