HV Morton, In Search of Wales

Do you know, it's been just lovely travelling about Wales this last while. The weather has of course been notoriously variable, in particular with Welsh rain being terribly fierce, but I've met such wonderful people, and seen such sights as dreams are made of.

The market at Caernarvon might be my favourite moment from this journey: "I stood in it and listened to the vivid and vivacious language, the sudden jokes, the whispered scandal, the funny treble voices of children speaking Welsh.... I would have given anything to have understood them" (p.104).

Admittedly it's been strange visiting Wales in 1931, in the company of the complicated H.V. Morton driving round the country researching his In Search of Wales, but needs must as the devil drives (or H.V. Morton, as the case may be). Surely I'm not the only person tempted to climb into historical writings about highly specific places, and if you're that way inclined, I don't know that you could do very much better than In Search of Wales. 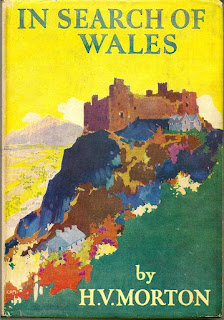 
I wish to see nothing finer than Criccieth on a sunny afternoon. A high grass-covered rock lifts itself from the sea, and on its summit is the gate-house and bastion of an ancient castle. When the tide is out there are yellow sands, rock pools and great boulders green with weed. There is a modern town, neat, precise--a delightful mixture of streets and fields and parks--but you never notice it because in clear weather it is impossible to take your eyes from the opposite coast. (p.117)

Clearly Morton took enormous liberties with the truth in his books, more even than is common in creative nonfiction, but you do come away from this book with a sense that you know the place, and that's not my usual experience of travel writing. The writer, sure, and the writer's perspective on the places depicted in the book, but not the places themselves (and their people). Morton had many gifts as a writer in this genre, and I'm finding it hard to resist thinking of this as a highlight among my recent reading.

And yet, mind you, Morton appears to have been a terrible, terrible man, as Max Hastings argues. Morton writes so very charmingly about Wales (and Rome, and England, and everywhere else he travelled): Morton as narrator is solitary, gentle, self-deprecating, almost endlessly appealing to the right reader, and yet I agree with Batgrrl that it's unethical to remain there. For example, Morton's biographer Michael Bartholomew, who began as a fan but in his research came to know altogether too much, reluctantly assesses Morton (in Hastings' words) as "vain, cynical, misanthropic, deeply anti-Semitic, with a penchant for grotesque sexual adventures."

On meeting two young women mountaineers on Snowdon in In Search of Wales, he remarks wistfully, "I do wish women would leave shorts to footballers and those thin, exhausted men with hairy legs who pant unaccountably in the dusk through the streets of cities" (p.150). In discussing with an elderly farmer his work as a writer: "writing [is] work for short-haired women and long-haired lunatics" (p.167). And while watching a choir of 12- to 15-year-old girls: "It was uncanny to realize as one looked at these long-legged, inky-fingered, spotty or peach-faced, funny little faun-like creatures that in another eight years some of them would be the wives and mothers of Wales. It was rather terrifying, like watching the manufacture of explosives" (p.67).

In his journal, Morton in 1941 noted, "I am appalled to discover how many of Hitler's theories appeal to me," as well as "I must say Nazi-ism has some fine qualities."

Why can't we just have nice things, for once?
Email Post
Labels: environment international nonfiction review