Eric Sloane, A Reverence for Wood

Cults roam the world. We know this. We fear them, with their rites and their implements and their inscrutable commitment to causes dark and wild.

And then there are cults like the one around Eric Sloane: many Sloane fans are elderly, many wear suspenders and ball caps, and they quietly see The Way Forward in and from his detailed, sketch-illustrated books about bygone America. 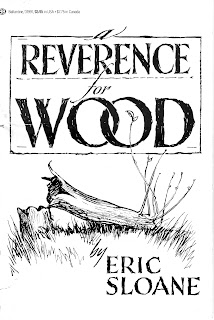 I'm trying not to become a Sloanie myself, if I might coin a phrase, not just because celebratory Americana unnerves me (though it does), or because I'm cautious of movements generally (though I am), but because he's an Easterner through and through. Among American oldtimers, I want to throw my lot in with Wallace Stegner instead, and with his thoughtful passion for the West. I might as well say it, though: Eric Sloane's popular history is deeply compelling for someone like me.

A Reverence for Wood, first published in 1965, was Sloane's twenty-first of his thirty-eight solo-authored books. Many of them are popular works on early American history, especially on rural, agricultural, or labouring topics. This one focuses on -- anyone? anyone? yes, you in the back? correct -- wood. An organizing theme is an ancient variety of apple called the "Seek-No-Further," but Sloane is at pains primarily to articulate the depth and complexity of the early American connection with wood.

This "historical novel," as Sloane calls it, moves back one century at a time from 1965 to 1665. As a result, the first chapter is about a man dismantling a collapsing barn one nail at a time so he can re-use the wood. He's working with a very knowledgeable older local fellow: they figure out that some of the planks, for example, were cut as floorboards in the early 1700s, based on nail holes and saw marks. We learn about the history of nail production, from hammered to punched, square to round, as well as about the various cracks or "checks" that wood gets as it dries. Subsequent chapters on earlier centuries explain topics as diverse as:
I tell you, it'd be like listening to my grandfather, if he really knew the things that, as a kid, I romantically thought he knew. It's about the East, though, about a mode of settlement that's foreign to British Columbia, as it is of all Canada west of Ontario (and, as Stegner insists, to just about the entire American West as well). This is a world without much relevance to my own, except for the passion and the sense of embodied memory.

Such a delight, this book! From now on I'm going to look out for some of Sloane's other ones when I'm in bookstores: maybe Our Vanishing Landscape, An Age of Barns, or A Museum of Early American Tools....
Email Post
Labels: american environment nonfiction review

John Mutford said…
Sounds surprsingly interesting. Though I'm still skeptical about the "how to" parts. Ever read Salt? I thought that Kurlansky also took a dull sounding topic and made it compelling- though I do remember the "how to" parts dragging- how to make a ham, etc.
July 10, 2007 at 6:40:00 PM PDT

richard said…
I haven't read Salt, no, though I do have Katz' book on sugar on my list (Sweetness and Power).

And I hear your doubt about the how-to bits, but I eat that stuff up: who doesn't want to know how to make clapboard with a froe and a huge mallet? (See http://members.fortunecity.com/john_deere/Tools/ for the sketch -- admittedly it's from another book, but same idea!)
July 10, 2007 at 7:36:00 PM PDT

Anonymous said…
My parents(Hippies) built just about everything around us with the examples in Eric Sloane's books. I would love to learn to make things the "old fashion" way...we all need to get back the old ways before they disappear.
June 4, 2008 at 2:08:00 PM PDT

richard said…
Thanks for the thoughts, Anon. That sentiment is one reason I persist with gardening without fertilizer, even though we've had a different yard each summer for the past several years and so haven't been able to build up decent soil.

But you know, it's surprisingly easy to learn how to do old things in old ways. You just have to be prepared to cock things up terribly the first few times!
June 4, 2008 at 10:36:00 PM PDT

Anonymous said…
I recently came accross your blog and have been reading along. I thought I would leave my first comment. I don't know what to say except that I have enjoyed reading. Nice blog. I will keep visiting this blog very often.

MRod said…
I enjoyed this book. As a amateur wood worker it really helped me understand more about the Eastern forests and trees that I took for granted growing up around, but now as I am in the West I am longing to get back to East to explore walk the forests and work the wood.
February 8, 2012 at 10:06:00 AM PST

richard said…
Thanks for stopping by, MRod - yes, it's a really evocative, appealing book. I've enjoyed everything by Eric Sloane that I've ever looked at, and I suspect I always will.
February 8, 2012 at 11:13:00 AM PST