I know, I know, I should have read Frank Herbert's epic and epoch-making novel Dune years ago, but I was born in a barn. What do you want from me?

Thing is, I was the wrong age to be allowed to see the David Lynch movie when it came out, and as a result I only saw and heard the things that'd make sense for someone who'd seen the movie and read the book. I mean, come on, those outfits practically wrote their own jokes.

But Dune is a seriously impressive piece of work, and a serious work of the imagination. It's rare, I think, for someone to imagine as densely as this a civilization's dramatic changes without somehow falling into the assorted traps of dys- and utopianism, but that's what Herbert does. 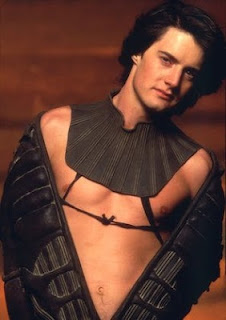 The Fremen are a civilization living out the implications of humanoid eugenics through interplanetary environmental manipulation, but so are the Sardaukar and everyone else, and the vast but secret humanoid breeding program of the Bene Gesserit operates around and through all of it. And then there's the problem of being able to see numerous possible futures simultaneously, an effect of the spice harvested on Arrakis, most of which show Paul, the main character, innumerable versions of an interminable and bloody jihad in his own name that he wants (mostly) to resist.

While reading, I kept finding myself thinking about Earth's desert peoples, especially in the American Southwest, which I know only through anthropological and ethnographic work by writers like Keith Basso (Wisdom Sits in Places, about the Navajo), Gary Paul Nabhan (The Desert Smells Like Rain, about the Papago), and John McPhee (Basin and Range, about geology and its effects on both perception and imagination, among other things, because honestly McPhee's a genius). It's not just that people have to act differently in order to survive on Herbert's imagined planet of Arrakis; it's that they have to think differently, imagine differently, even dream differently. Bioregionalism does take the imagination seriously, but I'm not sure that it's really caught up to the implications of Arrakis.

I haven't done any research yet into responses to Dune, but I'll have to dig into the critical material for the 2011/12 directed reading I'll be supervising. For now, I'll say simply that I've long thought of science fiction as particularly fertile ground for the analytical lenses of ecocriticism, environmental ethics, and posthumanism. Even so, it seems to me that Dune may well represent one of the most intriguing science fiction texts, and not just because of its popularity, for the citizens of a planet undergoing global warming as a result of anthropogenic climate change. Work to do, work to do.

Anonymous said…
Sorry. I didn't realize my 'paste' was leaving the whole message and by the time I saw it, I couldn't figure out how to delete it. I'm new at this, as you can see. I couldn't get your email and was trying to contact you. Sorry again and you can delete the post at your soonest. Thanks. Jim
April 16, 2011 at 6:25:00 AM PDT

richard said…
Thanks, James: original message deleted (and my unhelpfully cranky replies, too).

For future reference, the majority of bloggers include contact info of one kind or another on their "About Me" pages. In my case, there's an email button on the left-hand side: that's where it usually is for Blogger.com profile pages.
April 16, 2011 at 9:25:00 AM PDT