I'm a sucker for older paperbacks anyway, and I'm always looking for nature writing, so when I saw a 1966 edition of The Silent World at the Times-Colonist book sale this year, by Capt. J.Y. Cousteau with Frederic Dumas, well, I just had to grab it. Not that I was going to read it any time soon, necessarily, especially with all the things I have to do these days, but then Richard Ellis talked about in Tuna: Love, Death, and Mercury, and the cover reminded me of Arthur C. Clarke's The Deep Range, so onto the reading list it went. 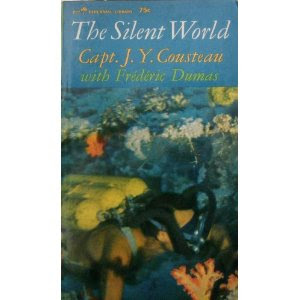 And I'm really pleased to have made its acquaintance, though I will say that, wow, the world was SUCH a different place a half-century ago!

This was Cousteau's first book, so he spends quite a bit of time on the background to his current work underwater (as of 1953). We learn, for example, that they had to invent almost every tool they used, and that as a result they could be subject to all sorts of risks: carbon monoxide poisoning from the generator that powered the pump filling their air tanks, for example. More than that, they tried all sorts of experiments just to see what would happen: moving progressively closer to underwater explosions of one-pound TNT bombs, for example ("When a burst caused too much discomfort, we stopped" [p.41]), and other explosives as well.

Their relations with the life aquatic, too, was fascinating. Cousteau described how whole species fish in different areas, which at first were curious if not friendly, learned rapidly that humans were dangerous as a category and hence began to avoid them. He suggests that they seemed able to recognize the limits of human powers, so staying just outside the different ranges of harpoon, spear, and so on, as if they recognized the different weapons separately. He recounts the story of what dragnet fishing looks like on the sea-bottom, appalled by its indiscriminate effect; he describes numerous heroic (!) battles underwater with large fish that have been harpooned by hand.

Cousteau offers up gory details, too, about what can go wrong on a dive. When a helmet diver's air supply fails at great depth, and if the nonreturn valve doesn't hold, very bad things happen: "By the suction of the air pipe, his flesh is stripped away in rags which stream up the pipe, leaving a skeleton in a rubber shroud to be raised to the tender" (p.133). I like the double meaning of that word "tender," too.

It's instructive, too, to recognize just how gradually his vaunted environmentalism grew in him. In the years before this book, Cousteau and his crew would harpoon dolphins and let them swim for hours, doomed, so that sharks would approach the boat. Similarly, they occasionally used grenades or explosives to kill enough fish to attract sharks, and on occasion just to obtain an accurate census of fish in a particular area. Frederic Dumas, who regularly coerced octopi into "dancing" with him, by exhausting them so much that they weren't capable of resisting him, delighted in spearing large fish. Environmentalism flashes into and out of sight constantly throughout The Silent World, and I really appreciated catching it on the wing like that, so to speak.