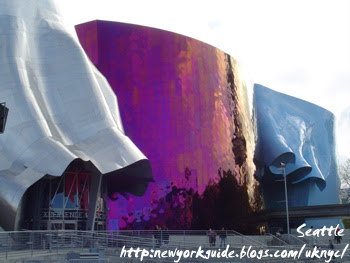 On a recent trip to Seattle, my first in more than a decade somehow, I dropped into the EMP gift shop to see what was there. Mostly I was there just to admire/goggle at the outside of my first Gehry fantasia (to which I responded both "whoa..." and "srsly? wtf?!?"), but museum gift shops are always cool places.

And a treasure did I find, too, in German comic artist Reinhard Kleist's graphic novel biography Johnny Cash: I See a Darkness. Now, I'm hardly going to be uninterested in this book, because I'm a sucker for anything to do with Johnny Cash; in fact I also bought a belt-buckle in Seattle featuring a photo of a young Cash inside Sun Studios, which I'm wearing as I write this. I'm not sure that I could ever be a properly critical reader of it, since Cash provided a large chunk of the soundtrack to my youth in the BC interior through the 70s and 80s, so I'm reassured by the warmth with which Kleist's book was immediately received when it was first published (which was in German, in Germany, much to my surprise!).

As other reviewers have said, like Marc Sobel or Michael Faber, this is a biography that's short on facts, long on impressions, and echoing with the half-remembered half-truths that've been so important to Cash fans through the years. After all, Cash went for long periods without much success, and his voice was almost from the beginning more iconic than genuinely popular. Kleist's version of Johnny Cash draws heavily on the image cultivated by and for the brilliant albums produced by Rick Rubin, and for me that's a very good thing. Rubin understood better than anyone, except possibly Cash himself, how potent an image Cash could be simply as himself, and their American Recordings albums are (for all their occasional and shattering clunkers) utterly remarkable documents of a musical legacy. Rubin's Cash is a tormented, driven, darkly complicated figure, exactly what we've always thought Cash was but more so.

Kleist's artwork is wonderful, interspersing scenes from Cash's life with depictions of song lyrics that feature Cash himself as the boy named Sue, or young Bill who gets shot for taking his guns to town, or the cocaine-injecting wife-killer Willie Lee. There's not much gray in Kleist's images, almost everything starkly black/white, which contrasts very effectively with the great attention to detail in Cash's represented physicality (the hunched shoulders, the slightly hanging head, and so on). In a sentence? Kleist runs the Rick Rubin Cash through the early days of Cash's career up to his Folsom Prison concert, 1956-1968, backwards-engineering the iconic rebel that Cash has become after his death -- and as a Cash fan who knows that this isn't anything like the full picture, I couldn't be happier with the book that results!

Mind you, I'm dissatisfied by the portrayal of June Carter Cash: she was a different-looking woman, and either Kleist had trouble with her facial structure or he wasn't as exercised by this part of the job. Reese Witherspoon managed to portray June's vibe nicely in Walk the Line, though they looked almost nothing alike. Kleist's June is unattractive, like an anti-Witherspoon, but in reality her unusual appearance was waaay appealing for a lot of men in her day -- plus the young June was a whole lot less square-jawed and wild-cheekboned than the older one. Not the first time that a comics artist misrepresented a female character, though!

And also, do yourself a favour, and watch Johnny Cash sing the gorgeous "Man in Black," live from 1971 on his TV show. I get the shivers so hard sometimes with this song that I've been known to tear up from it. Up front, seriously, there always ought to be a man in black.

fiona said…
Tangentially, "I See A Darkness" is one of my all-time favorite songs. Not the Johnny Cash cover -- although that is nice too -- but the original by Bonnie Prince Billy. Have a listen! http://www.youtube.com/watch?v=LAriDxTeed8
February 29, 2012 at 10:02:00 AM PST

theresa said…
I love his version of "Four Strong Winds" -- a different song entirely from Young's, or (of course) Ian Tyson's. And, well, everything on those late cds, the ones Rick Rubin produced. A voice pared back to essentials.

richard said…
It's a great buckle, Theresa: my first real buckle, too, rather than just a thingie to keep the belt ends together.

And yes, so many songs on those final Rubin discs are excellent. Have you listened to Personal File, the two-disc set of things Cash recorded by himself in his office? Hymns and psalms, a Robert Service recitation, John Prine's "Paradise" (Best. Version. Ever.), that sort of thing. It's essential listening, even if only a few songs make it into MP3 rotation for you.

theresa said…
I haven't yet figured out MP3s. We have such a slow internet connection (and mostly this is good) that I still buy cds. Real ones. We do have a MP3 player (I can't load it or whatever one calls it...) but mostly we just use it for road trips. Or planes. So I will order Personal File and put the cds on the player and turn the volume up loud.
March 17, 2012 at 8:05:00 AM PDT