While I may spend a lot of time reading children's books, I mostly read them aloud to my daughter, rather than quietly to myself. Most of these are truly children's books, too, pre-teen fiction rather than examples of the much-bruited Young Adult Cash Cow literature. When I stumbled across S. Terrell French's Operation Redwood, though, it seemed time to give YA fiction a try. 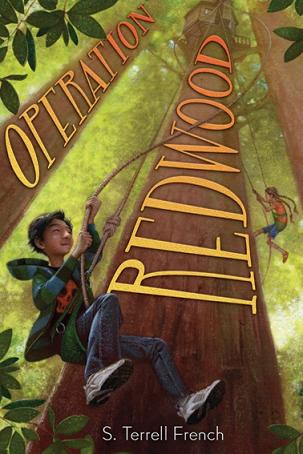 Let me be clear at the outset: this is a doomed review. I consistently kept expecting the things I'd want as an adult reader, but trying actively to suppress those expectations, and in the end I think I've failed to keep an eye consistently either on what the intended readers might want, or on what adult readers might want. Read on at your peril, is my point.
Operation Redwood pursues a third-person limited-omniscient narration, in which we're largely inside the head of 12-year-old Julian Carter-Li. Julian's father passed away some years before, and his mother is absent from the novel (and mostly from his life) because of her work: she's in China on an arts grant, so Julian's staying with his father's horrid brother. We're not inside the other characters' heads, but we do get to read emails written by several of them, and I thought that was a nice way to get around the otherwise nearly absolute focus on Julian and his perspective.

The story is easily summarized: Julian's uncle runs an investment firm that has come into possession of an old-growth redwood stand, and that has obtained approval to log the stand. By accident, Julian learns of the grove's existence and its imminent logging when he learns of the extreme anger of a young girl who lives next to the grove. Through complex machinations (that reminded me of Tom Hanks' son's escape for New York in Sleepless in Seattle), Julian ends up on site with a group of kids making a last-ditch effort to stop the logging.

It's a novel whose heart is in the right place, certainly. The representation of protest was really effective: the need for sustained determination, for elements of carnival, and for overcoming one's susceptibility to social authority. Kids who read this novel will see how kids might undertake protest actions, even if it's all a little cartoony (especially the relatively easy success), and for that reason alone I'd recommend this novel to anyone who might be on the cusp of embracing social justice. (Kids, certainly, but maybe adults too who wouldn't mind the comparative simplicity of YA fiction.)

But like I said, I'm not a regular enough reader of YA lit to know whether the novel works for its intended audience. Operation Redwood has won some awards, and I gather that it has sold okay, so I'd interpret both those pieces as positive. I enjoyed it, but I had trouble plugging into it, in spite of my obvious interest in a novel championing environmental protest. Good stuff, I'd say -- best for precocious 11-yr-olds, through to about 14.
Email Post
Labels: american environment fiction review west coast