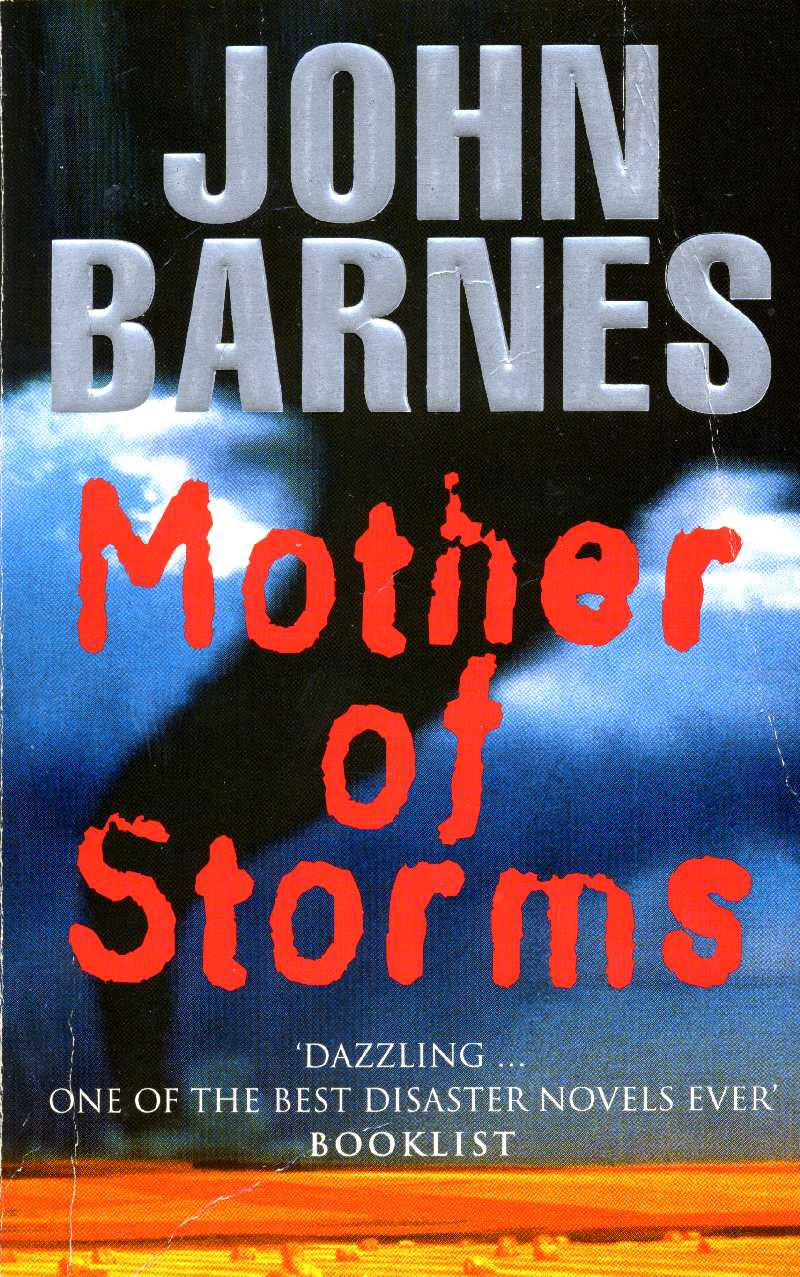 I didn't mean to read Mother of Storms right now: when you're trying to grade student papers, the pressure builds that pushes you to follow non-responsible paths, but I'd meant to put some distance between John Barnes' 1994 novel and my recent reading of David Brin's 1990 novel Earth. In the end, though, it was the right readerly move to throw them into fairly close sequence. We're living in a climate-change future, always imagining the consequences of our current action and inaction, so it was refreshing to stick with fiction that deliberately imagines a climate-change future.

But it's not just that they're both examples of climate-change fiction, though they are, or that they're both written from a particular point in our collective history, though they are (1990 for Brin, 1994 for Barnes). It's that they share a common perspective on technology, particularly on linked technologies like the web, and that they both end up thinking carefully about ideas related to The Singularity. (Or should that be without capitals?)

I sometimes find myself thinking about what I call a "Star Trek future," where apparently insurmountable problems have been seamlessly solved, and these novels both push toward such a future while detailing the enormously difficult challenges that would need to be overcome before we get there. Most days I have next to no hope that we'll achieve the necessary cultural escape velocity, so to speak; some days I have no hope. Brin and Barnes, like Kim Stanley Robinson in his Three Californias trilogy, give us a look at where some of the pivotal moments just might come from, and they give us some clues about how our actual culture might be able to survive them.

In both cases, to be honest, I think that the climate-change elements wind up getting muddied by the authors' senses that climate change isn't enough to carry a whole novel. For his part, Brin includes a recent nuclear war focused on exterminating the Swiss banking system; alien civilizations influencing the Earth's development; and a quantum singularity inside the planet threatening its ultimate destruction. Barnes antes up with a recent nuclear blast that destroyed Washington, DC, and almost all the US machinery of government; the UN's global dominion as a semi-autocratic force; and climate hyper-change as a result of nuclear-like weapons releasing massive amounts of methane from clathrates under the Bering Sea.

Like I said about Earth, Barnes had enough material for Mother of Storms to be a ripping yarn without all the other stuff, but maybe it wouldn't have counted as SF enough for him to be happy with it.

I was fascinated by most of the novellas embedded inside this multi-strand novel, mind you. Mostly there were clear reasons for them -- an old-school journalist in a networked future, a meteorologist working remotely from her boat in the Pacific, the inner machinations around the US President, and a couple of others -- but they did build on each other into something impressive. Remember, too, that the issue of methane releases in the Arctic is real and current (though not highly likely at any one point), so it's not something that'll only happen with a nuclear explosion in a location that's currently a long way from anything that the nuclear powers care about.

And there's one other thing. One thread of this novel follows the lifelong pursuit by Randy Householder of his daughter's killers. This future has a technology called XV, which allows you to share a person's experiences directly, and there's an incredibly intense market for what's called "deathporn." In brief, you can experience the sensations of both parties to a rape and/or murder, even though the death penalty awaits many people whose involvement is discovered. Householder's young daughter Kimbie Dee was one of the most notorious victims, and so as the novel goes on, we keep hearing directly and disturbingly about some of the quite agonizing aspects of her torture and murder.

It's utterly, utterly horrifying. All of it, and it's overkill: the rapist and murderer isn't just violent, but also deformed, gigantic, from the lower classes, ticking every single box of nightmare for the white middle-class subconscious.

Hurricane Clem, though, kills more than a billion people.

It's almost impossible to pay attention to Kimbie Dee Householder, because her death is so ugly, and some readers would find these sections of the novel unbearable to read: they might even stop reading because of them. Clem is just as monstrous as her killer, though, just as freakish and natural and culturally produced, and in consequence there's a mammoth, overwhelming logic to the novel's persistent return to this young girl's torture.

Why does it sound so facile to say that Barnes is saying that we're torturing the Earth just as this unnamed man tortured Kimbie Dee? That Barnes places us as Earth's rapist, torturer, murderer, unless The Singularity comes (and doesn't exterminate us, from an excess of logic)?

In sum, I'm not sure whether I'm recommending Mother of Storms. Did I like it? Is it good? I'm not sure that either question really matters. Maybe I'm finally, belatedly, getting why my most persistent critic won't let me talk much about pulp-ish SF....
Email Post
Labels: american environment fiction review science fiction speculative fiction

Fraze said…
And interestingly, Bruce Sterling's Heavy Weather is from 1994 and is similarly about the effects of ubiquitous linkage—and seriously bad climate change.