Update: this review has been partly retracted. Feel free to read this one, but you need to consider it to be incomplete.

The annual Times-Colonist used books sale is coming up before long in Victoria. I don't buy much there anymore, because frankly I'm a lot happier supporting independent sellers of new books, but it's impressive to see how many copies there are of classic Canadiana: separate tables for Atwood, Pierre Berton, and Carol Shields, and an entire wing dedicated to Peter C. Newman. 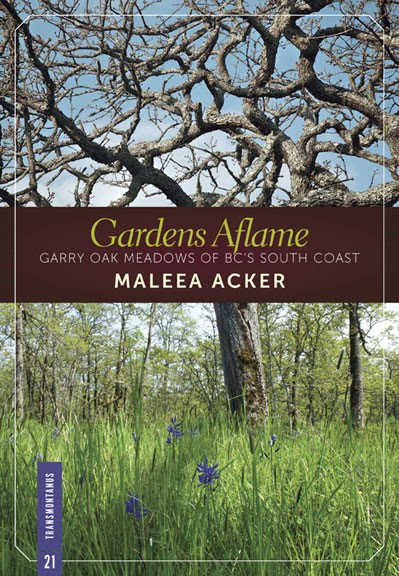 And really, why? I've always assumed that a lot of these books are given away -- and then donated -- because the giver means well, but doesn't know where to start. We readers aren't easy to buy for, we know that, especially when a wishlist would be called "cheating," and especially when the giver isn't much of a reader, but there are solutions.

One of those solutions, in BC: Transmontanus is always a good answer. They're an unpredictable bunch of books, some of them poignant and some of them slapstick, and others mostly informative, so there's always going to be a choice in the catalogue. Browse them online, and then get your local indie bookstore to order a few in.

Mind you, I'm not sure how highly I'd rank Maleea Acker's Gardens Aflame: Garry Oak Meadows of BC's South Coast amongst its Transmontanus kin. In following a tried and true strategy for environmental writing, she blends her own story (which is a good one) with the story of a place (which is also a good one). These books aren't long, however, though much longer than an essay, and I'm just not convinced that it's carried off the best way it could've been. Acker's web home for material from the book is well worth exploring on its own, especially for the gorgeous colour versions of the book's black-and-white photos, and I wish I was more consumed by the book. Indeed, I blame myself, and I'd encourage you to read Amy Reiswig's appropriately positive story for Focus on Acker and her book.

Garry oak ecosystems are seriously rare, and they exist almost entirely because of a fire-based management regime practiced traditionally by the Salish peoples of the Northwest Coast. These meadows were burned deliberately, every few years, for centuries and centuries, and in consequence they're a very good example of a complex culture achieving sustainability. Captain George Vancouver and the rest of the colonists thought they'd found miraculous natural gardens, and since the end of the 18th century, traditional management of these lands has become ever rarer.

Maleea Acker, knowing much of this backstory, decided a few years ago to manage her yard in such a way that it would revert, eventually, to a Garry oak meadow. Her neighbours thought it was unkempt and a fire hazard, and the District of Saanich investigated whether she should be forced to mow it all down. Now educated, her neighbours are fans, and the municipality has helped her out a bit, but that's not how it started.

Gardens Aflame brings together these two stories, along with the falling apart of a romantic relationship. I really appreciated the last two chapters, "Restoration" and "Gardeners," and there's good information in the previous ones. This wasn't an easy book for me to sink into, which hasn't been my usual Transmontanus experience. As such, I'm inclined to lay some of the responsibility on the book, but to be honest, I'm not inclined fully to trust my reading these days, due to assorted work-related pressures I'm blogging about elsewhere. Acker's book deserves a careful read, and I think it'll reward that: it's just that I haven't been able fully to give it that attention.

If you're in the market for a book from and/or about BC or the Pacific Northwest, but Gardens Aflame sounds like it may not be the one, you should consider Grant Buday's funny and thoughtful nouveau back-to-the-land Stranger on a Strange Island; Don Gayton's Kokanee: The Redfish and the Kootenay Bioregion, biogeography by a man still thinking hard about the loss of his father; Theresa Kishkan's gorgeous, intimate stories in the (I'm sorry, Theresa!) terribly named Red Laredo Boots; or Andrew Struthers' mad picaresque humour in The Green Shadow.