John McPhee, Coming Into the Country

I've commented before on the deep, nerdish pleasure I take in reading John McPhee, and Coming Into the Country (about Alaska, from 1976) confirms my thoughts in those other reviews. He has an unparalleled ability to make you obsess nerdishly about subjects you knew next to nothing about, before falling into his book, and you really must find one of his books that won't put you off. The people in this book might put you off, so The Pine Barrens would be a safer bet, but seriously, you'll be better off if you can just spend some time with McPhee, sometime.

Coming Into the Country, if I can carelessly summarize a nonfiction classic, is about perspectives on Alaska from people with different attitudes toward government and the frontier, with those differences being utterly American in scope and angle. The garrulous man of independence, rabidly opposed to government support of those who can't do for themselves, being cared for hand and foot by his third wife; the sneakers-wearing environmentalist from outside Alaska, unaware of basic wilderness protocol and yet vastly more competent in the wilds; the outside-educated Native Alaskan, who returns to his home to be scorned as un-Alaskan by whites from Michigan with three winters behind them: you know McPhee's politics, but this book's not really about politics. It's about a place where politics are nakedly revealed, are deeply implicated in local conflicts of every kind, and are almost entirely irrelevant to the business of survival, which is the only business that matters in 1970s Alaska.

By this time, McPhee had put a lot of months and miles into wild places, but he wasn't prepared for Alaska, which he had thought of as the culmination of this work:


"I may have liked places that are wild and been quickened all my days just by the sound of the word, but I see now I never knew what it could mean. I can see why people who come to Alaska are unprepared. In four decades of times beyond some sort of road, I never set foot in a place like this. It is in no way an extension of what I've known before. The constructions I have lived by ought not, and do not, apply here. Left on my own here, I would have to change in a hurry, and learn in a hurry, or I'd never last a year." (p.271)

Human death, quite simply, haunts every page of Coming Into the Country. Very few deaths are depicted, fewer reported on at something close to first-hand knowledge, and yet it's clear that for McPhee, the likelihood of dying because of your own actions is the key to understanding human existence in Alaska. 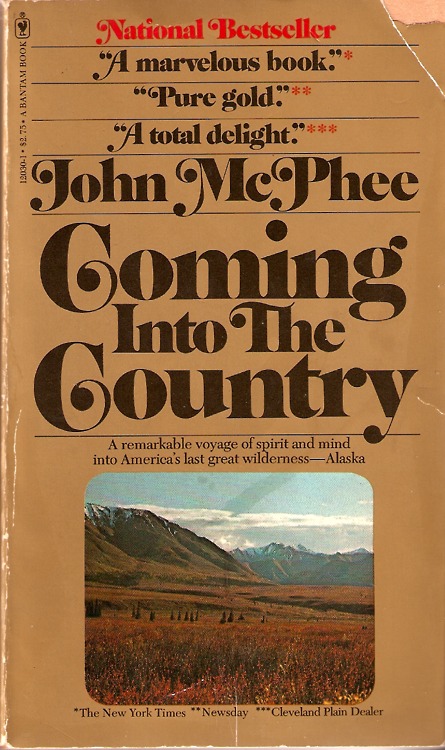 Not that humans are all that important in McPhee's Alaska, "a place so vast and unpeopled that if anyone could figure out how to steal Italy, Alaska would be a place to hide it" (p.57). We have great power to damage ecosystems in Alaska, particularly through destroying the protective cover over permafrost and through injuring the thin, slow-growing vegetation of the tundra, but in the end, Alaska exceeds us, exceeds our capacities.

This book could have been three books, so distinct are the three sections, and the later McPhee would likely have written three separate books that could subsequently be collapsed into something massively larger than this already hefty volume: I would probably have enjoyed that more, but he was young. How could he have known the publishing strangenesses that he was going to be allowed to get away with, once he started working in the highly marketable, bodice-ripping genre of geological nonfiction?

Like McPhee's geological books, Coming Into the Country isn't for everyone -- but for those who'd like that sort of thing, it'll be one of the best books you'll ever read about this kind of place and this kind of subject. Remarkable.
Email Post
Labels: american environment nonfiction review