Brian Fawcett, My Career with the Leafs & Other Stories

Brian Fawcett is one of my touchstone writers, one of those writers I default to when I'm looking for something uncomfortable that still shares some of my own background and instincts. This means that I have no idea whatsoever why Book Addiction HQ hasn't reviewed any of his books before now, except that the peak of my Fawcett obsession faded before this blog's 2006 start date. 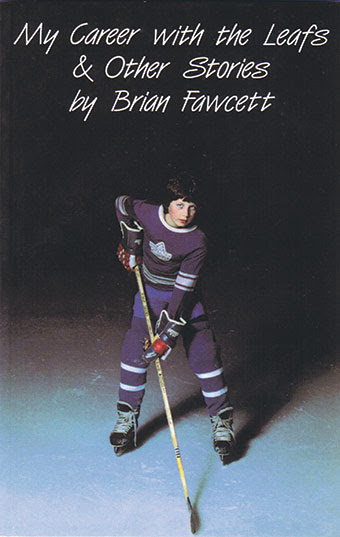 And so I've been really pleased to make a little time to re-read, once again, Brian Fawcett's 1982 collection My Career with the Leafs & Other Stories. Among other books reviewed here, it reminds me most strongly of John Harris' Small Rain, which occupies very similar ground at the boundary between fiction and non-fiction (also set in Prince George, BC, either oddly or significantly).

The book consists of twenty-two short stories, linked by the recurrence of characters and the persistent anchoring in Prince George, but the narrator's name is "Brian Fawcett," and except for the final two stories, the book follows a roughly chronological sequence from age four to nineteen. It reads like fictionalized autobiography, though I haven't gone to the trouble of connecting the dots between Fawcett's biography and his fiction.

Fawcett camped on this boundary again many years later in his Gender Wars, incidentally, which generated the following from Andi Zeisler in Bitch: "What would be really great is if Brian were to just chuck the whole po-mo is-it-autobiographical-or-does-he-just-want-us-to-think-that? fiction angle and go ahead and write a sex manual for the single, confused, disaffected individual."

As far as Gender Wars goes, I'm very much on Team Zeisler. In My Career with the Leafs, though, Fawcett hadn't gone nearly as far down the road of formal experimentation as he did in the sequence of books following Cambodia: A Book for People Who Find Television Too Slow, and so Zeisler's objection isn't yet relevant here. Mind you, I doubt the Portland-based founder of the seriously admirable Bitch empire is all that interested in a dated and dubiously fictionalized manual on growing up unmanly in manly small-town British Columbia, but I happen to know a whole book club that might really appreciate it.

It's full of small gems, this book, such as Fawcett's reflection on the outcome of a pivotal but typical hockey game:


"Carl was next to me crying softly, the sky was pale blue, and the snow was very white and cold, but it seemed mostly that people bled, and that other people were pretty cruel" (p.32).

And of course it's something of a bildungsroman, a portrait of the artist as a young boy, circling warily around the nature of story and the problem of fiction from elsewhere:


"People could drive cars, make money, eat Chinese food, get into fights, and shoot pool. They could even die. But novels came from someplace else, far away and outside the possibilities of a small town like ours" (p.135).

But mostly, it's funny and sad and real, from thinking that the singular of "elves" surely must be "elve" and pulling out the nose-hair of your sleeping father, to the overall jerkiness of softball leagues for adults, and finally to an absurd encounter with the toweringly stupid Howie Meeker while playing, inexplicably, for the Maple Leafs. Full of small gems, this book is itself a much larger treasure, well worth your time.