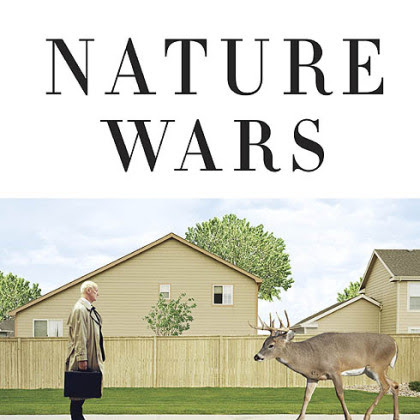 If we're ever going to understand how we might relate with nature, we'll have to come to terms with the notion of shifting baseline syndrome.

Shifting baseline syndrome is Vancouver-based fisheries scientist Daniel Pauly's term, but it has rapidly come to be widely accepted. Basically, what we see in front of us represents "normal" to us, and if we don't have a clear sense of history, then we never question what relation the present has with this historic. Across just the span of our own lives, we tend to hear as nostalgia comments about the past, including our own "when I was a kid" stories, but SBS explains that we are incapable of tracking change unconsciously. We adapt, and generally without reflecting very closely on what we're adapting to. (Click here for a sobering historical series of "trophy" fish catches, discussed by Loren McClanachan.)

Jim Sterba doesn't mention shifting baseline syndrome in his book Nature Wars, with its breathless subtitle The Incredible Story of How Wildlife Comebacks Turned Backyards into Battlegrounds, but it's behind most of the social phenomena that he describes. His story is of the American Northeast, which is subject to a number of historically unique pressures and phenomena, but to lesser degrees (and with local twists) the same story is playing out across North America, including here in British Columbia.

Really, it's all about the pace of change.

Or think about feeding wild birds. In 1945, you just couldn't buy bird feeders, because who would do such a thing? Sure, we could watch birds, count them, eat them, but it'd be absurd to attract them without utility to our homes. In 2010, Americans spent roughly $3.5 billion on wild birds, just in the forms of bird feeders and bird seed.

Or pet cats: from only 4 million in 1947 (though an uncountable number of farm cats), to 86 million in 2011, plus an estimated 60 million feral cats. Cat lovers refuse to take this explosion into account, when they think about the impact they're having on bird populations. Sterba does what I think is his best to treat with respect protectors of feral cats, who after all tend to be motivated by respectable ethical considerations, but lordy, are they ever misguided in consequence of their historical and ecological ignorance.

Sterba's book is a bit of a slog to read, as it's a very long work of journalism rather than creative nonfiction, but it's such an important subject. He doesn't make recommendations, since that's not really the journalist's way, but he sets the table nicely. I've come away a lot readier to be involved in discussions about reducing animal numbers through lethal force, and that's a sign of how effectively Sterba has marshalled his evidence.

(I'm late to the party, so this is a short post, but the NY Review of Books had quite a long discussion, complete with huffy letter to the editor from the save-them-all activists Sterba describes; the Wall Street Journal offered a mid-length but not very thoughtful reading; and even Men's Journal weighed in.)