Am I late to the party, or was there unaccountably no party?

Does everyone already know Gerry Alanguilan's graphic novel Elmer, or is it instead some kind of cult object or under-appreciated gem?

If you read only one graphic novel this year, you owe it to yourself to enter this alternate Earth, where chickens have suddenly and inexplicably acquired human-comparable intelligence and consciousness, including ability to understand, speak and write in human languages. In what ways, Alanguilan asks, does our current mode of existence depend on the instrumentalization of other beings?

On the ideas front, Elmer questions the notions of species identity, discrimination, inter-species relations, and surviving trauma. It's a persistent, inescapable question, how one goes about recovering from a life of absolute subjection: the chickens who changed on that . On the details front, we've got Jake, a cranky and somewhat foul-mouthed young chicken as sensitive to discrimination as George Jefferson; his brother Freddie, a suspiciously metrosexual movie star who wants to be called "Francis" now; and their sister May, who's marrying a doctor -- and human. ("Fucking banana ketchup!" shouts Jake, in part of his rant about why chicken-eating humans must not, as a species, ever ever ever be trusted or forgiven.) 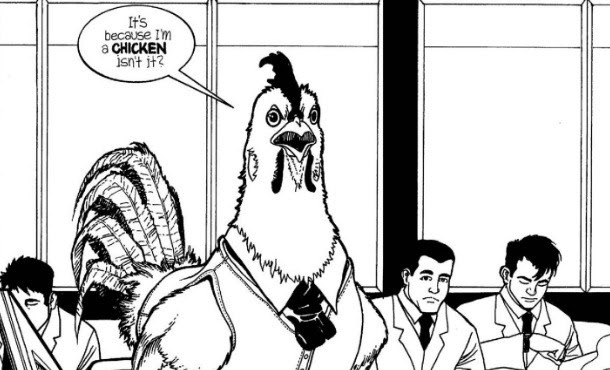 In other words, this is a very funny book, even when it's fiendishly serious about the consequences of our recognizing the sentience of another species. That's unsettling, laughter generated by the pages before and after blunt statements about traditional bird-flu responses (i.e., slaughtering and burning millions of birds) as genocide. Artists in the Philippines have thought about these issues as long ago as the 1950s, incidentally, and I'm excited to watch the 1952 movie, which actually did star a chicken in the lead role.

A not entirely irrelevant digression: I'm not quite sure how to respond to designers who deliberately make art, furniture, or decorative objects out of the remains of birds killed out of fear of avian influenza.

One of the elements I most appreciated about Elmer was simply that it's about chickens, not humans. Of course it's tough to read this and not think about slavery, colonialism, and the Holocaust, but Alanguilan doesn't make those connections explicitly. Alanguilan's birds aren't anthropomorphized at all, except that they wear clothes and have unexpectedly dextrous wingtips, and they're not proxy humans. Simply put, there's enough to think about already, if it were to turn out that each one of the 50 billion chickens killed globally each year should  be thought of as individually equivalent to a human being.

But it's a family drama at heart, this book, which just happens to be situated at the cusp of epochal changes to life on earth, and these are complicated characters whose lives it's easy to find oneself invested. Highly, highly recommended!

Elmer sounds really fascinating and if you're interested in more crazy animal rights type graphic novels, I highly recommend Adam Hines's Duncan the Wonder Dog, Vol. 1. It's the first of a planned nine volume series and features a host of talking animals including some radicalized terrorist monkeys.
April 14, 2016 at 9:09:00 AM PDT

richard said…
Super cool, Matt! It's now on my list of desirables.

M. Zantingh said…
I do have Jon Gordon's book on my shelf! I'm hoping to get a crack at it before ALECC in Kingston, but there are plenty of other things on my plate as well.