I continue to stand by my insistence that Richard Wagamese's Medicine Walk was 2014's best Canadian book, and my love for that novel has only grown since then. Still, now that I've read Indian Horse (how the hell I didn't get around to it, who the hell knows, seriously), we all should have known that he was about to do something this amazing. 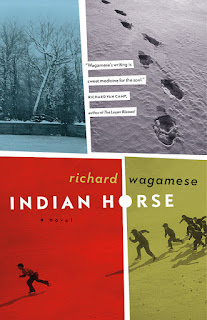 One of the 2013 CBC Canada Reads selections, Indian Horse follows the life of Saul Indian Horse from before his birth (because understanding family sometimes takes more than the one generation) through his family's colonialism-driven, alcohol-sparked implosion, his years at residential school, his rise as a hockey hero, and the consequences of growing up with these competing pressures. Saul shared not just his grandmother's gifts but also, and crucially, her embeddedness in the world, so when his family fell away from him, he was left with a sense of vision but nothing to train it upon. Hockey is of course the Canadian Game, and so for all sorts of reasons cultural (for Saul) and literary (for Wagamese and his readers), hockey is where his gifts were exercised.

It's a gem of a novel, with complicated characters cleanly sketched out, a frame narrative that fades into the background but explains perfectly the voice and narrative structure, and twists that I should have seen coming and yet broke my heart. Unfortunately, I don't know if there's much more I can say about the story itself without giving away something valuable, something that you'd be far better off discovering for yourself.

I found this novel an incredibly fast read, though, even faster than The Road, and to my partial shame much of it was read poolside. If you know someone who likes hockey and might benefit from -- and be open to -- reading something to clarify why we have to keep talking about residential schools, Indian Horse should be what you reach for. (Or maybe just this excellent article on hockey at residential schools, I think by Courtney Szto.)

And I'll just assume that Hymie Rubinstein and Rodney Clifton received the avalanche of copies that they deserved after their ham-fisted posts from last year (even if Wikipedia seems at present to consider them inexplicably reliable commentators!).
Email Post
Labels: aboriginal canadian environment fiction politics review