Larissa Lai's amazing new novel The Tiger Flu is beyond me, but that's not neither a complaint nor precisely a compliment, either: the book's simply not for me, a white cis male English professor in the country currently known as Canada, just as stereotypical #CanLit isn't particularly accessible to a great many readers and writers in this country, and that's one reason that more people need to read it than, probably and (if so) lamentably, will lay their hands on it. 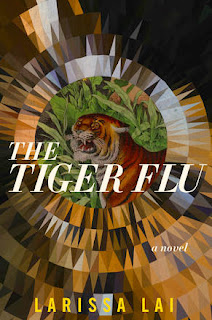 If you're looking for a way into The Tiger Flu, the publisher's summary is very good, in that it gives away very few of the novel's richer machinations. It's silent, though, on the book's last 90 pages, or more than a quarter of its length, which means, for example, that it doesn't even gesture toward important characters who aren't introduced until then. Still, you can get a great flavour of the novel from even the blurb's first sentence:


"a community of parthenogenic women, sent into exile by patriarchal and corporate Salt Water City [the former Vancouver, BC, before the novel opens in 2145 AD, 127 years after oil], go to war against disease, technology, and an economic system that threatens them with extinction."


Anyway, while this novel is full of allusions, large and small, I'm confident that I'll only ever recognize some of them. Lyrics from the Everly Brothers, Annie Lennox, the Beatles: dated mainstream music is exactly in my wheelhouse, pop culture that's old enough to no longer be pop. Add to that my generally mainstream CanLit background, plus soft-green environmentalism and 18th-century studies (I know, shut up...), and I'm not going to have an easy time catching other references. Heck, I even had to look up the word for currency in the novel, "renminbi": am I the only person who didn't know that was a word for the official currency of China, a.k.a. the yuan?

But as Rita Wong has argued in her brilliant essay "Decolonizasian," reprinted in 2015 by Canadian Literature, "normalized whiteness [is] the reference point through which we come to articulate our subjectivities" as Canadians (p.158). All of us readers, writers, and citizens need to find ways to surrender the default setting of there being one Canadian culture (which happens, totally randomly I'm sure, with no coercion or hegemony involved) to be basically white and Anglo. One step in that process is for white Anglo readers to read texts that don't accommodate them, like novels by Larissa Lai: hence my happiness to see The Tiger Flu come out this year, and my utter delight that my students in English 478 jumped at the chance to read it with me.

Which is why this isn't a review, but a laying down of markers about Interesting Things in the novel, preliminary to more blogging about those and other details or themes. Here's hoping that these same students can help with some of the allusions I don't even see yet....

Basically, the novel pursues two parallel tracks that eventually overlap. One follows Kirilow Groundsel, a 19-year-old clone and intensely post-naturopathic doctor who has grown up in the BC interior somewhere beyond the Okanagan, in a commune composed entirely of cloned, genetically and biotech-modified women; the other follows Kora Ko, a 15-year-old from Salt Water City with a complicated family background who has very different obligations to biotechnology. Each suffers calamitous ruptures within their families and communities, setting each on the path toward a quest whose goal may end up having to stand in opposition to their desires.

It's a help that the novel opens with a two-page cast of characters, though it includes only enough information to serve as a reference point during your reading. There's no hint at why Kora's brother at home has the name he does, for example: he's nicknamed K2 in order to match his twin brother Everest, those being the two highest mountains in the world, but also he's named Godwin Austen. I assumed at first that for some reason Lai was referring to to Mary Wollstonecraft Godwin and Jane Austen (two British women writers of the Romantic period, broadly defined), but no, "Godwin-Austen" is actually an alternate name for K2. As it happens, K2 carries that name in honour of Henry Haversham Godwin-Austen, who among other things may have been the first British convert to Buddhism.

Even just the cast of characters, in other words, is a rabbit hole.

More helpfully, The Tiger Flu also opens with clues about the multiple autonomous zones within what we currently know only as British Columbia. The First Quarantine Ring corresponds pretty well with downtown Vancouver, and the Third Quarantine Ring corresponds pretty well with the Okanagan. I still haven't figured out the second ring (the rest of the Lower Mainland? the Fraser Canyon, starting at Hope? lands of the Secwepemc peoples?), and I could be wrong, but the Coast Salish Timeplace seems to be everything north of the Fraser River--which seems to be called here the Sto:Lo--along the coast.

Regular readers of dystopian / utopian science fiction, especially of varieties explicitly eco and queer, may well find themselves more comfortable here than I do. English professors, as I've said openly many times, are generally bad readers of SF, because they've traded in any chance at genre familiarity for esoterica across multiple historic periods: 17th-century religious treatises, 19th-century ballads, whatever. I'll blog again about the novel after the class starts digging into the novel. Really looking forward to it!

Note / confession: I've struggled with Larissa Lai's fiction before, in that case with Salt Fish Girl. Five years ago, I taught that novel in a BC literature course, blogging about it not just once but twice beforehand. At the end of the course, a student came to me in tears to say that as a trans woman, this was the first time she'd seen herself in a novel she was studying at university: I'd taught it for multiple reasons, queerness being only one of the minor attractions for me, but I genuinely treasure that moment. I'm honoured that I've found a second group of students to read Lai with me.
Email Post
Labels: academic british columbia canadian dystopia environment fiction review science fiction speculative fiction UVic west coast