There's magic in the novella.

So few pages, so little scope, and yet in the hands of an accomplished writer, it's possible to generate something enduring, something whose memorability is totally out of scope. Theresa Kishkan's Winter Wren is in my view one of the best BC examples in this form, as I've said already, but in Inishbream, she writes a lovely BC novella that's set almost entirely in Ireland, and in some ways it may be the greater achievement even if, myself, I prefer Winter Wren.

There are some excellent commentaries out there about Inishbream, including a very generous response over at Commatology. For what must be the most intimately readerly review out there, spend a few minutes with the thoroughly intoxicated Rob Wiersema. I don't propose to detail the book very closely, though, 18 years after its publication, even though it does seem (hurrah!) still to be available online from its publisher, Goose Lane, because it's my blog and I can do what I want. Instead, I want to pick at one element of how I found myself responding.

A perennial question about Canadian literature, readily imported into discussions of BC literature, is about how to assess whether a book is Canadian enough (BC enough) to count. The call is easy in many cases, so many books exhibiting a Canadian writer writing about Canadian settings, but the more regional your case, the trickier it gets to police the boundaries. Here, we've got a Canadian writer giving us 102 pages about a barely fictionalized wee Irish island, with half a page for a flight home and some gestures toward arrival: we're only calling it BC fiction on the off chance that it'd make the Irish press notice us, surely?

Absolutely not. This novel could never have taken the form it has without Kishkan's BC background. As she's written previously, Kishkan was 23 when living the months fictionalized in Inishbream, 44 when it was first published, and it's a thoughtfully British Columbian writer's book. All her narrator's landscapes make the most sense when set against BC's west coast, its trees and rawness and vastness, and her place-embedded Irish characters are foil to BC's settlers, all of us--ALL OF US--still unsure how not to cling so obviously to a place where we're not home even if we know no elsewhere. Kishkan's uprooted Canadian narrator is a settler on this small Irish island, much as she is when living in Canada. Inishbream's gentle but deliberate probing of the narrator's discomfort and growing fittedness deepens the book, but it also pushes the novella toward the persistently crucial BC questions of belonging, occupation, and settlement.

My one early doubt about this book was that the phrasing wasn't comfortable for my ear at first, and arrogantly I assumed I should perhaps blame this on someone other than me. Gradually, though, I started to hear the voices, and it rapidly came to sound just right. When I moved next to read Des Kennedy's Irish-y memoir The Way of a Gardener, it was clear that I'd been taking for unnecessarily poetic what I should've been hearing as Irish: my fault, in other words. (I don't get out much. A life among books, etc.)

At bottom, I don't think I knew what I had in my hands, when I started Inishbream. Once I recognized its value to my thinking about this my only place in the world, instead of a journal of more or less foreign experience, albeit beautifully written, I didn't want it to end, and yet I needed desperately to find out how it would end.

Seriously, just read this book already. Be patient until the voices come, and then it'll repay you immensely.

(And if it's not already clear that I'm a fan, there are many, many traces of digital ink about Theresa Kishkan on this blog....)
Email Post
Labels: british columbia canadian environment fiction international kishkan review west coast 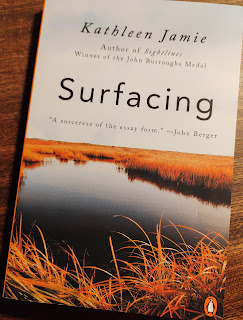