Global Warming & the Sweetness of Life: A Tar Sands Tale. To which one might just say, "Seriously?", in reply to which you should say, as so often, "Shut up and read." 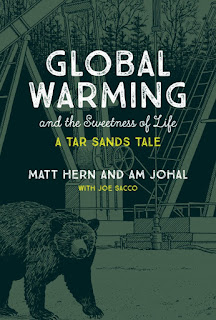 Matt Hern and Am Johal, with the assistance and deep engagement of Joe Sacco, have in this book pulled together all sorts of wisdom, science, and story as they search not just for the more likely trajectories we humans may have set the planet on, but for reasons to stay hopeful: "Ultimately, we want to speak frankly of love" (p.174). In other words, it's an apocalypse narrative with a heart of gold, or maybe a dystopia with escape hatches, and that's enough for me to call it essential reading.

On the other hand, it's settlers writing to settlers, so that's not news, but with vast amounts of assistance from Leanne Simpson and other Indigenous thinkers. I'm glad they listened, and I'm delighted that they made so much room for near-verbatim reporting of what they learned, but we'd all be better off if more settlers tried reading (or listening to) folks like Leanne Simpson, even if we don't fully get it. Settlers like me just need to learn more, and if we'll learn it from settlers, great (but PLEASE go on to read non-settlers!).

Basically, though, the authors' appealing titular phrase "the sweetness of life" is their rendering of the Latin American phrases "buen vivir" and "sumak kawsay." Without giving anything away, I want to say that they find reasons for optimism even in the failures of Latin American governments (in Bolivia, in particular) to live up to their declared belief in these concepts. The sweetness of life is to be found in interaction, in mutual respect, in openness, in manifold pleasures of the good, not just between humans but amongst the widest conceivable communities of animals, plants, landforms, and more.

As Derrida said of justice, so too we should probably say of buen vivir: impossible to reach, but essential always to be seeking after.

It's from the MIT Press, this book, so it's not aimed at a mass market, and so the authors are comfortable with extended discussions of theorists like Agamben, Badiou, and David Harvey. There's a very pleasing density to much of Global Warming & the Sweetness of Life, pleasing to an aging academic like me, at least:


New possibilities for life emerge only when the cloud of originally land-thefts lifts, and we can conceive of how to life an affirmatively ecological future beyond exploitation. Better relationships with land and with each other become available to all of us only when we renounce colonial domination. (p.172)

And yeah, that's a forcefully expressed view of a challenging idea, and if that's your jam, this book's loaded with calls to arms / tools. Alternatively, there's space for Leanne Simpson to confront the authors directly, as she does when they ask if a critique of development might be useful:


You settlers are so weird! It's so weird to think of development, no? Indigenous people have always thought outside of development. We did rice, we did sugar, we did life. We sunk ourselves in life and relationships. We had a lot more fun. We weren't developing. (p.68)

In sum, no one else could have written this book, in this form, and it's a delight to be faced so openly with such complexity of perspective in (mostly!) direct prose.
Email Post
Labels: academic canadian dystopia environment international nonfiction politics review west coast