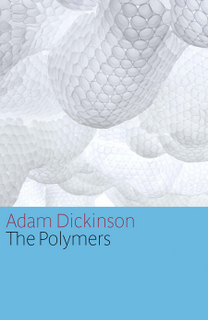 "I hate my genitals," writes Adam Dickinson in "Hang-Ups": "They remind me of communism. / Who needs another vanguard party / ascending the staircase / à la mode?" (p.39)

There's a whole lot of funny in Dickinson's collection The Polymers, though readers would be better off being deeply immersed beforehand in contemporary poetry. This book takes real chances formally and intellectually, and Dickinson's efforts reward a patient reader who's prepared to put in the work necessary to make sense of the endnotes while worrying over the separate poems -- though I'm not quite that reader, myself. Rachel Wyatt in Lemonhound might be that reader, or at least her review is a wonderful lesson in patience and inspired reading, but even she comes away puzzled by The Polymers.

The book's organizing conceit is to explore assorted plastics and petrochemical compounds, thinking through their creation and non-decay in tandem with the composition and decomposing of poetry and poets. Some poems are filled with poignant remarks, Rube Goldberg sentence structures, near-impenetrable poetics, and satire:


Mosquitoes pass along malaria like constructive criticism, while the buzz on the street is run-on sentences accruing in prisons with dangling modifiers and infinitives split along party lines. Business interests disperse their eggs on the fabric of passing interests. (“On Again, Off Again,” p.22)

Other poems are, well, "poems" rather than poems as such. Several consist entirely of diagrammed chemical compounds, with "Honed Security Procedures Following the G-20 Toronto Summit Protests" being one example. It's not until you read the endnotes, at the back of the book, that you realize the diagrammed compound is Kevlar, a key bulletproof material. (Ditto "Che Guevara Delighted to See His Face on the Breasts of So Many Beautiful Women," for spandex.)

“Holy Shit, Ruby, I Love You” might well be my new favourite poem for reading aloud, though it doesn’t quote well. More accessible, but less rhythmic and evocative, is "Hoarding":


The trouble with idealism

is every so often
you have to dig up the bodies
and move them.
That plastic patch in the Pacific

At times, and sometimes for a few pages at a time, it's a book to fall in love with, to marvel at for the ways in which it manipulates cross-references and competing registers of syntax and meaning.

But I give the last word to Rachel Wyatt: "This is a book worth reading in order to struggle with its alienness, to be confronted with its unfamiliar language and representations, and maybe even to be defeated, confused and lost in its play between serious sociological or environmental points and an evasive looseness of reference." I genuinely don't know how to sell the virtue of a book that leaves you feeling defeated, confused and lost, simply at the way it uses language. The expert reader of contemporary poetry would experience The Polymers quite differently than would anyone else, and I'm uneasy with the degree of isolation there.
Email Post
Labels: canadian environment poetry review