What's not to love, to an academic, the sight of other academics acknowledging our collective time under the wheels of progress, administration, and anxiety? Go check out Emma Rees' lovely review, if you have the time. 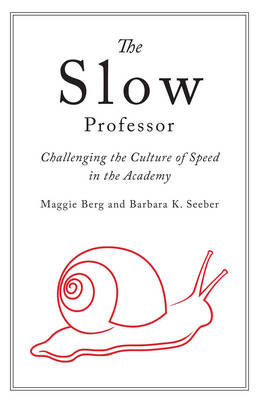 Mind you, The Slow Professor: Challenging the Culture of Speed in the Academy didn't arrive without detractors, even if some of those detractors hadn't yet read the book itself, and even if some of them mostly agreed. Maggie Berg and Barbara Seeber, its co-authors, take the view that the job of professor shouldn't be survivable only thanks to imperviousness to an intensity of pressure that drives others into illness (or worse), to persistent refusal to do the work necessary to keep the institution vibrant, and to atomization rather than collegiality. I don't see what's wrong with that, and so I found myself completely ready to follow along with their approach to reimagining the contemporary university.

But it's complicated. Their decision to focus on professors had the effect of seeming to exclude students, instructors who aren't professors ("sessionals," they're usually called in Canada, and "adjuncts" in the US), and other members of the campus community. I spend a lot of energy worrying about those people, and so it makes sense to me that one should critique them for this gap. But is reimagining the university a job that can be achieved with only one 100-page book? Should we expect two English professors to correctly do all this work on their own? Should we blame them for failing to be polymathic prophets and fixers? No, no, and no, but still: not only is it not easy to see professors as the most long-suffering or victimized folks on campus, it'd also be wrong to see them us that way.

But still, if I can add another "but still": too many professors aren't well, as a direct or indirect consequence of efforts undertaken to live up to the expectations we place on ourselves because we imagine them to be essential expectations for us held by the institution, and by its innumerable members. This broad sense among professors of drowning has shadows among students (themselves overwhelmed by expectations and workload both real and imaginary), among casualized instructors (whose employment cannot be described without the word "plight"), and among administrators. Find something to help any one of these groups, and you might be taking a step toward helping the others, and that's what Berg and Seeber are trying to achieve with this book. It's not about making professors' lives easier, not as a a primary goal at least, so much as building a university that's genuinely sustainable for everyone involved. These authors are professors -- why not write about the university experience they know best?

The Slow Professor is a book I'll keep coming back to over the years. A few of my colleagues have their own copies already, but mine's available for loan. Let's rebuild this place together.
Email Post
Labels: academic canadian nonfiction review UVic