As I've mumbled before, there are poetries that don't fully make sense to me, and Madhur Anand's in her collection A New Index for Predicting Catastrophe is one of those. She's seriously talented, and when she finds a careful reader who grasps both her methods and her aims, the outcome is a beautiful thing: you'd be far better off reading Rudrapriya Rathore's generous, patient review in The Puritan than trusting these notes. 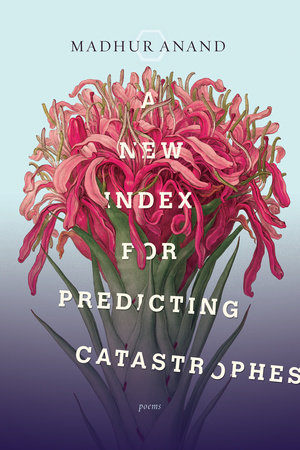 Throughout Anand’s book appear found poems, more or less, drawn from Anand’s own scientific articles: at least, they’re composed solely of words and phrase drawn from those articles. I loved the strategy, audacious and inventive, but in general these weren’t the strongest poems in the collection, and so I found myself wondering about the value of the strategy – even though I immediately imagined adapting, borrowing, building on it.

And I wondered and worried, even though there are many lovely poems here, memorable and striking and carefully considered, and even though Anand has a great hand with the intimate image:


Two glasses sit side by side
on the table like windows
one filled with sunshine
one with melting ice caps (“Three Laws of Physics,” p.79)

Still, there are pieces that have the feel of exercises rather than poems. “Empty Calories” is wonderfully incantatory though only a list of artificial sweeteners or sugar substitutes, as is “Various Authors Have Described,” that poem being a sequence of apparently unrelated noun phrases, but I found only “The Strategy of the Majority” to stand out from the other poems of this sort:


do not bring education campaigns, economic
incentives, or ordinary
differential equations with fixed
carrying capacity
to the final destination
…
the price of finding equilibria is increasing (p.75)

For me there's a lack of fit at times between achievement and ambition, and I see it most clearly among these semi-found poems. Anand found what she took to be a productive, suggestive model, but in working a number of variations on the model, in my reading she illuminated its limitations rather than its potential.

Or maybe it's instead a lack of fit between writer and reader, and frankly I hope that's the case. In my dreams, every writer finds an ideal reader: I'm old enough to have given up aiming to be always that reader, old enough to recognize that feeling guilty about one's limitations isn't good enough even though they can't be evaded.
Email Post
Labels: academic canadian environment poetry review

TommyR said…
‘The Pandemic Is a Prisoner’s Dilemma Game’ https://nyti.ms/3p9Lx4G