You figure it out.

Your first option is that American hedge fund manager Bill Browder's Red Notice: A True Story of High Finance, Murder, and One Man's Fight for Justice is the story of Sergei Magnitsky, the Russian lawyer murdered for his persistent and honourable defense of Browder's interests (which mostly coincide with free-market capitalism, and much more loosely with vaguely democratic principles). In this reading, Red Notice is another step in Browder's long work toward justice for Magnitsky. In many ways, that's how Browder would like the book to be understood, and that's fine.

I mean, it's vastly more complicated than just that, but it's fine. I'm in no mood to learn enough to decide how I come down on the question of Browder's relationship with the assorted Trump scandals underway, because Americans can figure out their own damned politics for themselves. (Among other things, in spite of his decades-long history of war against Putin, for some reason Browder's in conflict with the oppo-research firm that developed the Trump dossier.) 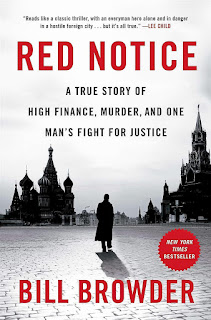 But basically, Browder's book argues that Sergei Magnitsky was tortured to death in a Russian prison under the orders of senior officials in the Kremlin. Since then, Browder has had enough success arguing Magnitsky's case that numerous countries (including Canada) have passed legislation in Magnitsky's name intended to penalize anyone involved in Magnitsky's death, and these laws have been expanded by some countries to cover corruption occurring in other countries, too. Magnitsky's final year was a horror, and the heroic stoicism Browder credits him with makes it just that much more horrifying. Reading this book, without any information to counter its claims, I think it's impossible not to take onto yourself at least a little of Magnitsky's suffering. It's to Browder's credit that he's given a voice to Sergei Magnitsky, and to tying Magnitsky's name to the international fight against official corruption.

So far so good, because it's an important story told by someone close to the very centre of it.

God damn, do I hate everything else Browder stands for, though, and so your second option is that Red Notice is self-serving trash meant to distract its readers from the fundamental venality of its author and the robber barons he represented.

Between 1996 and 2007, while the Russian people were hungry, suffering from institutional corruption, and watching their nation and culture collapse around them, Bill Browder's firm's investments in Russia earned returns of almost 2700%.

Especially early on, Browder's investments consisted of buying in bulk the stock certificates given to ordinary Russians. These ordinary Russians undervalued these stocks enormously, because they needed the small bits of cash they'd garner just to buy themselves food and necessities, and they couldn't wait. Browder realized that if his firm bought up lots of these stocks, eventually they'd be valued appropriately, and his firm would make ("earn") all the money that poor Russians needed but were unable to wait for.

And that's exactly what happened. Bill Browder made billions for his clients by finishing the job begun by the Russian oligarchs and the Putin government's tyrannical kleptocrats. In part he did this by exposing their corruption, but in part he profited by taking advantage of the situations caused by their venality and by the brute stupidity of their thieving.

Consistently, Browder has been quite rightly pointing out their manifold sins, corruptions, and monstrosities, and good on him for that, but again: 2700% in 11 years, taken directly from ordinary Russians.

Browder is right that the Russian oligarchy and the Putin kleptocracy have conspired to mire the Russian people in terrible straits, and I'm glad he's done his bit toward exposing the extent of their corruption. The fact remains, though, that he and his clients benefitted from that very same oligarchy and kleptocracy. Browder's conscience was inspired toward revolution, rather than the lite exposés intended mostly to goose the stocks he'd invested in, only when the oligarchs and kleptocrats went after his money and his clients' money.

Also, and I know I'm a snob, but it's a terrible book. If it wasn't so marked up with research, it would sound like it was transcribed from an 80s-style dictaphone that some dude with a fluffy bathrobe talked into every night.

Sergei Magnitsky's is an incredible story, but why wouldn't Browder not just stick to the mostly legal but deeply unscrupulous, virtually immoral investing he seems so good at, and give a tiny bit of cash to an actual writer? It's weird, I tell you, to see someone so very wealthy, and so committed to this such an important subject, write a book so very, very badly.

In sum: Sergei Magnitsky was tortured to death by the Russian government, for the crime of being an honourable man, and kudos to Bill Browder for bringing this to light and for insisting that official corruption be brought to account. Bill Browder's dealings in Russia, though, are the epitome of ruthless capitalism, profiteering off the plight of the poor and the victimized while praising himself just for noticing their victimization.

I wish I'd been able to read someone else's story about this. Thanks, book club.
Email Post
Labels: book club international nonfiction review