I want to thank, right off the top, the PR staff for Freehand Books. 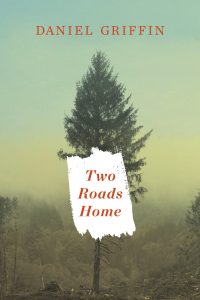 After Daniel Griffin's Stopping for Strangers came out, my somewhat fragmented review ("review") of the collection wasn't positive, even if I mostly put the blame on myself for not being the right reader. Generally I trusted the reviewers who'd found the book more rewarding than I had, but that's the best I found to say about it. As a result, I'm impressed by, and grateful for, the tenacity and courage of the Freehand staffer who asked last year if I'd like to take a crack at Griffin's new novel Two Roads Home.

Synopsis (giving nothing away that's not on the dust jacket): environmental activists looking for a way to trigger social change set off an explosion at a logging company warehouse, just as a security guard arrives, and the novel follows the increasing chaos and disintegration of their lives. The main character, Pete Osborne, spends some time off the grid with some squatters (similar to Sombrio Beach), while his mother tries to find him and help clear his name. In the end, the various roads home start to come together, and we start to imagine what complicated future might follow the novel's closing pages.

Overall, I feel positively about Two Roads Home, and so I'm not going to say very much about the details of its content, on the assumption that you might choose to read it yourself. If that synopsis grabs you at all, then you're going to enjoy this book, and nothing good will come of my giving anything away. If it doesn't, then what are you reading this sentence for?

However, I'm also deeply wistful about the novel that Griffin didn't write. (Honestly, the audacity of novelists who don't commit to satisfying my precise interests. I can't even.)

Here's the main trouble I experienced reading the book, and it's not a new trouble. Simply put, the dust jacket promised me a different novel: "what if, instead of the peaceful anti-logging protests of the 1990s, things had gone too far?" The jacket and the book's PR suggest that Griffin "re-imagines history" in this novel, and I took that to mean that he'd be reflecting on the post-protest course of BC environmental and social history. Is there still room for Tzeporah Berman? Does BC end up protecting the Great Bear Rainforest? Is there a longer delay before Patrick Moore gets ridiculous?

Two Roads Home isn't that novel, even though I would both read and teach the daylights out of that non-existent other novel, and so I had a hard time getting over this expectation.

Instead, Two Roads Home is about how an intense but relatively late-to-the-party environmentalist ends up involved in violent protest action, and about what happens to his personal future after violence occurs. The main protagonist, Pete Osborne, has recently moved from the prairies to the West Coast to attend university, and it's there that he's radicalized. This is the basis for a really interesting Canadian story, and I think that those reviewers who've felt most positively about the book were committed from the outset to this particular narrative arc. Unfortunately, I only gradually realized the centrality of this highly personal arc, and that's coloured my thinking about the novel since finishing it.

Another trouble, that I think I've gotten over, is that Two Roads Home doesn't pass the Bechdel Test, to my recollection at least. (I'm surprised that this wasn't taken up in any of the book's reviews, but on the other hand there haven't been very many reviews.) There aren't many important characters in the novel, but only four female characters get recurring speaking roles: two of them are mothers of male activists, both of them wanting their sons' names to be cleared, and the other two are potential love interests for Pete Osborne. Their representation is fairly shallow, too. Even though we get direct access to the thoughts of the beachfront-dwelling Inez, in particular, her actions can be tough to square with the situations she's facing, and her backstory (like her offstage future, to come after the book's ending) is fascinating.

But as I say, I've mostly gotten over this worry. If we take the narrative posture to be deliberately sympathetic to Pete Osborne, partially even a proxy for his perspective rather than neutral, then we can perhaps find it easier to blame the narrative posture for the sins that we're harder to place on the mostly likeable Pete. My own preference as a reader (especially when I'm reading without enough attentiveness! Which sometimes happens...) is for narration that I can trust, or narration that I know how to distrust, and I don't think we've got that here. In other words, maybe we're supposed to distinguish ourselves from the narrator, as a way of ensuring that we distinguish ourselves from Pete Osborne -- but I'm an English prof, so over-reading is what I do.

Long story short: even if it's not the novel I wanted, Two Roads Home is good stuff nonetheless, and that's especially true if you're a green-tinged West Coast reader who likes a touch of thriller in your non-thriller fiction.

(Other reviews: In general, I'm on board with Jonathan Flieger's sense of wishing the novel had been other than it is. However, Flieger's complaints feel more writerly to me than readerly, and so I think that many potential readers would prefer Brianna Bock's more positive comments about ambiguity. Also, there should have been more reviews, because it's a better novel than the paucity of reviews might seem to indicate.)