David Brin's Sundiver comes squarely from the west coast tradition of ecological science fiction. Its publication in 1980 means that it's missing some of the more egregious sexism that marks such 1970s classics as Ecotopia (1975) or Poul Anderson's Winter of the World (also 1975). On the other hand, it's also missing some of the energy you can find in 1960s and earlier science fiction, when novels seemed to me a little more randomly speculative. (Does it still count as "speculative" when you're just describing the logical outcome of contemporary discoveries?) 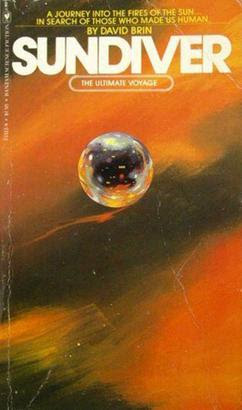 But it's an intelligent and thoughtful book, even if the psychologizing is sketchy, the detective-ish procedural a little clunky, and the ending a little ex machina for my tastes. Most important, at heart Sundiver is a fundamentally environmentalist text.

The background's a bit complicated, but basically humans have just been discovered by all the other known oxygen-breathing races across the universe. Every known intelligent species has been "uplifted" by someone else, with the possible exception of the now-vanished "Progenitors" who are believed or assumed to have started the Uplift. All species have honour based on the ancestral line of their patrons, and the line of those they've uplifted themselves. Humans, though, have no patron species, but (though living in ignorance of the otherwise pan-galactic mandate to uplift others) have uplifted two Earth species into fully communicative sentience, namely dolphins and chimps. This puts humans into a thoroughly awkward category for all the other species: cue a wildly complicated sequence of largely invisible but easily imagined scheming to control the implications of human sentience for the pan-galactic project.

The thing is, Earth is living this pretty tenuously. As protagonist Jacob Alvarez Demwa notes, it was fortunate that the first starship bringing extraterrestrials back to Earth was able to alert Earth's leaders to the importance assigned across the entire galaxy to caring for other species, thus allowing humans

... to bury the evidence of some of their crimes! Jacob was one of less than a hundred thousand human beings who knew that there had ever been such a thing as a Manatee, or a giant ground sloth, or an orangutang.
That Man's victims might have someday become thinking species was something that he, more than most most, was in a position to appreciate, and regret. (pp.90-91)

There's even a mention (albeit by the unreliable journalist Pierre/Peter LaRoque) of how important John Muir was to the history of this future Earth (p.249), along with the late 19th-century emergence of environmentalism. A few cataclysmic turns of human society had to happen before the pre-Contact stability occurred which meant the visiting galactics wouldn't condemn humanity for their treatment of other species, but somehow it's Muir who sets the table for what sustainability means for and in this future.

Anyway, I'm not going to get any further into the plot that occurs on top of all this background (basic question: are there any species living inside the Sun itself, and how might we check that out?), but it's a pretty nice example of post-70s West Coast ecological science fiction: recommended, and enjoyed!
Email Post
Labels: american environment fiction review science fiction west coast