A new contender for my favourite bookshop: Left Bank Books, which I visited a couple of times last weekend on my first tourist visit to Seattle in more than a decade. It describes itself as a "collectively owned and operated, community-based, not-for-profit project," with numerous specializations based on the interests of people in the collective. I managed to bring home only a half-dozen volumes, but it would've been more if they'd been prepared to ship things back to Canada for me. First book finished: Work, by the CrimethInc. Ex-Workers' Collective.

Colour me (re?)energized, and impressed.

Basically, Work starts from the position that economists don't deserve the privilege accorded them to comment on social structures: maybe on the economy, though CrimethInc. doesn't think so, but definitely not on society more broadly. Society is richer and more complex than merely its economic facets, no matter how intensely the economic order attempts to reduce society's richness, and how painfully successful such attempts have been. Work thus represents a lengthy sequence of sector-specific analyses of how work, capital, and economics have variously corrupted distinct elements of human experience. The writing is direct, sociable, committed, and -- most importantly -- accessible. 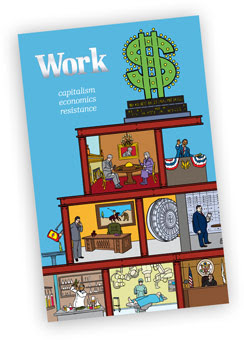 Case studies in how to steal from an unjust employer, how to organize a workplace for subversion without bothering with unionization, how to resist disciplinary technological surveillance: there's tons of praxis here, with a carefully philosophic underpinning. This doesn't mean I'm fully on board with all the details, but being in full agreement isn't what I take to be the point of CrimethInc.

Take their attack on gentrification, for example. The sequence of events genuinely does occur as they lay it out: an area falls out of social favour, and as rental or house prices drop, its demographics become less white and go down-market; once the prices get low enough, the gentry start buying it up and redecorating; once the redecoration is in full swing, the existing community gets pushed out the door. I'm not sure about their response, though: "the only way to protect your neighborhood from gentrification is to wreck it. You want to make it a place no one wealthier than yourself -- no one who had any other options--would ever choose to live" (p.289). If you make a lower-cost area nicer, you're making it more attractive for the exploiters to take it away from you. While I agree with that bit, and while I agree that the whole issue of aesthetics is hopelessly muddled by unacknowledgeable group-based self-loathing, I'm more than a bit reluctant to accept that one shouldn't paint a wall, or put herbs in the ground, or have a lawn that your neighbours can use for croquet.

But then I'm more about cooperation than obstruction at this point, as befits a middle-aged, middle-class academic like me. I'm still seeing cooperation as itself resistance, as well as a potentially effective tool in a resistance movement, so fouling my own nest feels like fouling the nests around me, of my comrades.

So no, it doesn't seem to me that CrimethInc.'s point is that I need to agree with every angle in Work. The point is that you start from where you are, with what you can do and what you know, and you work toward the world you wish you lived in: the point is that we all must start. Take the material world seriously, and reject economic arguments: capital must be stopped.

And hey, it's nice that they go so far as to admit that "Even lawyers and professors can play an important role if they can get over themselves" (p.349)! I'll get over myself, I promise, and I'll play a role. It'd be nice if I was tenured, since that's useful for an academic who wants to speak out or act out, but some things can't be helped. Certainly I thought immediately of some things on campus the last couple of years that I'd respond to differently now. Knowing my university's students as I do, I'm confident I'll get the chance to rectify some of those failures. Bring it on, guerrilla gardeners (and their haters), and the rest of you!
Email Post
Labels: american environment nonfiction review

You not only don't have to agree with everything in the book - you probably shouldn't. Let's face it:the book, as you describe it, advocates a bunch of negative activities as a response to a less than optimum environment. There are better ways to do stuff.

That said, it is great to talk about these things. We currently live in an unsustainable manner. The obvious conclusion is that we can't continue that. We need to consult each other and find a way to survive. Maybe we go the Earthfirst way (stripmine earth first and get to the other planets later) or maybe we figure out a way to keep this spaceship/lifeboat working longer and smarter.

The point I want to stress is that communication with people that we don't necessarily agree with is critical to our success.
February 18, 2012 at 4:42:00 PM PST

And wow, you're using "Earthfirst" in a way completely antithetical to what I'd expect, if you're linking it to strip-mining the planet.

And a planet SO isn't a lifeboat or spaceship: the technological metaphor fails to account for the complexity, the self-directedness, and fails also to inspire.

Zane said…
Richard - Haven't you ever seen the bumpersticker? "Earthfirst! We'll stripmine the other planets later!"? It's like the "One Less Bike" sticker - an in your face expression of opposition to lessening the impact on the earth. Still, they are kind of funny. You see them ont eh same logging trucks that sport the "Think Fast Hippy" stickers.

We need to figure out how to work together to survive or we will face a huge die off either through wars, famine, disease or starvation. Therefore we can engage in opposing each other or working with each other. The CrimethInc guys seem to be advocating the former, and if they follow that path they will lose (money and political power generally triumph over any violent opposition).

We argue way to much, and just for the sake of being right.