I wanted to loathe the new movie version of The Lorax. I really did, because the Mazda commercials are loathsome in their callous pimping of my idealistic admiration for this one wonderfully dark Dr. Seuss fantasia. I currently drive a Mazda, and thanks to those ads, I die a little bit every time I grudgingly climb back inside the thing. 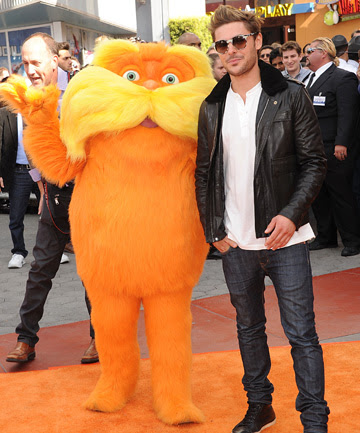 Indeed, I'd worked myself into a state of moderately high dudgeon about the movie, when Chris Turner posted a great article at MNN about it, entitled "The Lorax speaks for the SUVs? Yeah, sounds about right." Reeling a little from too abruptly consuming Turner's common sense, off I went to see the movie with my nine-year-old.

And you know, I didn't hate it, even if that's the best I can say about it. The Lorax tired me out, depressed me, and left me seriously frustrated about the military-entertainment complex that inhabits our collective imaginaries, but I didn't hate it. The movie introduces plot elements both sexist and racist that weren't in the book (see below), but those are so ubiquitous in other films, and so transparent here, that I'm slower to anger about those than I should be.

One throwaway element, in fact, even left me a little bit inspired, and wondering about the machinations behind the making of this movie. After the Once-ler has begun selling his thneeds and making his fortune, he manages to catch a photo of the Lorax holding a thneed. Immediately, this photo becomes an advertisement, a "Lorax-approved!" poster on the side of a vehicle: the thneed, just like the Mazda SUV, gets the Truffula stamp of approval. Inside the movie, we're supposed to be briefly disgusted by the Once-ler's co-option of the Lorax. Outside the movie, we're supposed to accept Mazda's co-option of the Lorax.

Let me say that again. The movie specifically denigrates the Once-ler for using the Lorax deceptively for the purposes of advertising. How can I not want to read this as covert resistance by the animators, added somehow on the final cut?

I said above that there are new racist and sexist plot elements in this film, so let's talk about those. I called them "transparent," too, and while I think that's true, I haven't seen much discussion of those. Too much fire being drawn by the SUV-shilling environmentalist icon, I guess.

Racism first, because it's a one-off thing that's campy and weird, and maybe not racist except in the eyes of a politically hyper-correct middle-aged white guy who's out of touch with contemporary music.

Basically, once the Once-ler gets incredibly wealthy, he starts throwing money around like a drunken CEO/sailor, which leads to a musical number called "How Bad Can I Be" (click for a YouTube audio-only version). The Once-ler stomps around the screen in a green velvet overcoat, with oversized matching hat and assorted jewelry, singing what amounts to low-rent guitar-assisted rap. The one-time farm-boy, skinny and innocent, makes big money and in consequence starts dressing like a cartoon pimp, rapping, and wearing what ignorant white-bread advertisers refer to as "bling."

Money corrupts the Once-ler toward conspicuous consumption, which is sort of in line with the Dr. Seuss original, but it's the specific form of this corruption that I'm interested in here: white farm-boy becomes faux-black pimp/rapper.

Maybe I'm overstating the movie's racism, since it's mostly in this one musical number that's voiced by the notoriously white Ed Helms, but I'm not overstating its sexism.

In the Seuss book, the Once-ler had no real motivation for his actions, except to become a success, and Seuss's Once-ler is an entirely self-directed, independent figure. The first thneed, too, is bought by a man walking by who pays $3.98 for it.

In the movie, the Once-ler is named Ted. (What's Dr. Seuss's real first-name again? Theodore? What a coincidence....) Ted leaves home mostly in order to prove himself to his mother. His brothers are both morons (in a clinical, Aldous Huxley Brave New World sense), and his father isn't much better, and yet somehow Ted understands that the women in his family see him as less valuable than the other men. Power resides only in his aunt (whom the Lorax, as you may have seen in the trailer, takes for a man rather than a woman) and in his mother.

Second, in the movie Ted/the Once-ler accepts the Lorax's case and decides not to cut down any more trees, because in truth, it's not entirely necessary to do so. The family's other men-folk even pick the Truffula tufts for processing, but it's a slow and inefficient job. So who's responsible for the decision to cut down the trees? Not Ted: it's his mother, and we even get to watch Zac Efron's Once-ler face collapse briefly into a mask of upset and confusion when she issues her decree. Sure, Ted profits mightily and (as noted above) turns for a time into a super-rich bling-wearing pimp/rapper, but he's NOT the one who wanted to cut down the Truffula trees. Instead, he'd agreed NOT to cut down any more of them. His mother unilaterally decides to overturn his conservation plan, and his mother has them all cut down.

Finally, in the movie the first thneed isn't even sold, and it doesn't go to a man at all. Instead, after failing to sell his only thneed after several days of sideshow-barker fast talking, the Once-ler flings it away in disgust. As fate and movie logic would have it, the thneed wraps accidentally around a teenage girl's head. She decides it's way cool, several other girls immediately decide the same thing, and with its girls leading the way, the entire town charges after the Once-ler waving money and demanding that he manufacture enough thneeds for everyone.

Because as everyone knows, teenage girls drive all changes in women's fashion, as well as consumer culture.

So like I said: the film of The Lorax tired me out, depressed me, and left me seriously frustrated about the military-entertainment complex that inhabits our collective imaginaries. I wanted better, but Chris Turner was right to remind me -- to remind us -- that there's nothing better than this to be expected. Time to raise the black flag, methinks.

And to you people who think that the movie's somehow TOO environmentalist, or that those of us who critique the movie are mean or anti-fun or against innocence: read the book again. Or get someone to read it to you, maybe, because you've missed the point somehow in the way you're reading it to yourself.
Email Post
Labels: environment review

richard said…
Well ... because I agree (reluctantly) with Chris Turner that there's just no point expecting anything from something as quintessentially consumerist as an expensively produced, mass marketed animation extravaganza.

No point being angry about this movie, when it's a relatively non-aggressive version of what every other film does.

Although I continue to regard it as a betrayal of the book, which was focused and harsh in some really valuable ways, like Bill Peet's Wump World.
March 17, 2012 at 4:36:00 PM PDT

Bella said…
Dumb evidence for racism and sexism, you forgot about the short Chinease guy which is the main racist thing, the other doesn't matter.
April 6, 2012 at 6:39:00 AM PDT

richard said…
Huh. You know, I didn't think of him as Chinese, and I still don't, but I guess there's maybe an argument to be made.

He's a shorter person with straight, shiny black hair, and I guess that fits the standard expectations for an animated Asian character, but his facial features aren't racialized. His name's a long way from Chinese, too: Aloysius O'Hare. Plus he has no accent in the movie.