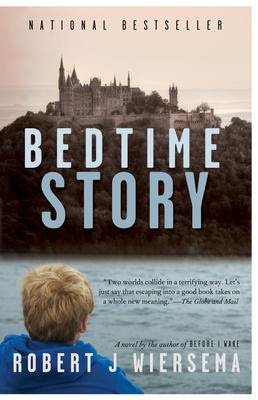 I've enjoyed Rob Wiersema's books before, both his first novel Before I Wake and his novella The World More Full of Weeping (which second book I seem to have promised some months ago to blog, after having read it more than a year before. Hmm). Plus I've been browsing slowly through Walk Like a Man since Christmas, and even though I haven't been entirely hooked, I'm delighted by his BC Book Prize nomination for it. (Perhaps unfortunately for him, up against this gem, for one, as well as against Fred Herzog's unfairly fabulous Photographs, too.)

But Bedtime Story? Wiersema has found another level here, though as with his first two novels, there are some seriously anxious moments for parents, especially parents prone to anxiety about their children's health and/or wellbeing.

As sometimes happens around here, it took me too long to get around to reading this novel. A year ago this past Christmas, I was fortunate enough to be given an advance reader's copy of Bedtime Story, complete with blue cover, a few typos, and an endearing question from a typesetter who seems nice, and unaccountably it's been sitting on my bedside book stack ever since. "No more," I thought, "I could use a big book to work through slowly": except that three days later, by which I mean three unhelpfully late nights later, I'd finished the thing.

If Before I Wake was a novel for women/mothers, a claim with which I disagree heartily but which apparently persuaded Tesco to market it as the product of genderless novelist "RJ Wiersema," then Bedtime Story is that novel's parallel for men/fathers. It's a false dichotomy that depends on gender stereotypes largely obsolete before the brief Kim Campbell administration, but the responsible Tesco employee can't be the only person to find enduring value in sexism.

Basically, Wiersema gives us a young boy who lapses into catatonia while reading a fantasy novel: because he's reading a fantasy novel, this particular fantasy novel. More than that, the boy is catatonic in real life because his consciousness is trapped inside the novel. There are all kinds of wonderful plot points and twists that I'm not going to give away, but Wiersema's managed a neat trick here: he's given us strands of three separate but interwoven novels, from three separate genres (a parent's fear of loss; a child's realization of mortality; high fantasy). The first draft of this novel, I gather, was something like twice the length of the published manuscript; university libraries of the world, I'm calling shotgun right now so I can be be the first reader of the full text, whichever of you winds up with Wiersema's manuscripts and ephemera!

I'm sure it was the right editorial decision to cut the length so dramatically, but having read this much of it, I'm really curious to know what else was going to be in there.

In writing about the novel, though, after the recent book club contretemps re Julian Barnes (here, and in the comments here), I do find myself worrying a bit about whether I'm letting Wiersema off the hook too easily. After all, the largely failed but formerly hot-young-thing novelist is common enough to approach stock, and of course the caring wife/mother is a nurse by profession, plus the "struggling kid finds salvation in literature" trope is every novelist's dream - and the dream of certain categories of parents, too, I don't mind saying. I worry a bit, but I found this to be a very original book, and I found its cliches to be either helpful or something of a trick being played on my expectations.

Incidentally, I stopped by Bolen Books today and bought a new copy. Totally worth it. Everybody should have a copy, and should buy it new from the store where Wiersema works.
Email Post
Labels: british columbia canadian fiction review west coast