Probably I should be writing about each novel separately -- The Hunger Games, Catching Fire, and Mockingjay -- but honestly, it's such a tightly integrated trilogy that there's not much point to thinking of them separately. Or rather, while Suzanne Collins' three Hunger Games novels make excellent sense as separate novels, with quite distinct themes, they're an impressively integrated collection.

Plus, argumentation aside, I don't really have time to deal with them separately this week. Sue me.

Also -- spoiler alert! This terribly scattered commentary (did I mention my lack of time?) will be full of them, starting immediately after the jump.

I want to thank Suzanne Collins, first of all, for her Epilogue after the third novel. The temptation had to be there to develop Panem's history over even more novels through the perspective of Katniss Everdeen, because in order to write these three novels as tightly as she did, Collins had to imagine the history, geography and culture of Panem much more deeply than shows in the trilogy proper. The Epilogue, though, greatly restricts the chance of there being additional Hunger Games novels by showing snapshots out of Katniss' life over the next few decades -- and suggesting her life will follow a long, slow trajectory of recovery (with lapses) and the sequence of marriage and motherhood. Her story in those years would suit many a novel, certainly, but they'd be very different from these three.

Graphic torture and murder; empire/margin politics; successful armed rebellion: not the same as a novel detailing a terribly damaged involuntary warrior's transition into the life of a quiet wife and mother. Collins could still write that novel, but she's left herself no room for suspense. Good for her, I say, because plenty of novels have found themselves writing unnecessary but profitable novels just because they failed to close doors in their novels. 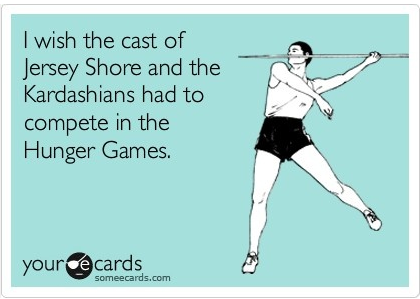 Next: I was fascinated throughout by what struck me as a collision between the enormously conventional narrative form (first-person perspective, young girl makes good, every bad guy suffers and/or dies) and the anti-capitalist, maybe even anti-American thematics.

By the time the third novel ends, not a single person who has power or money at the start retains either, with the possible exception of a few Games victors from previous years, like Beetee. The deserving (District-dwellers, in the main) have for 75 years been structurally oppressed by the celebrity-obsessed, leisured, moneyed culture of the Capitol, and it all maps easily onto a colonialist imaginary with the USA playing the role of Capitol.

I haven't seen the movie yet, and maybe I won't, but it seems unlikely to me that it'd survive the transition with all its satiric complexity intact. In the Games proper, Katniss is constantly doing things in order to please her audience, and she's not always sure whether she means what she says or does; it's hard enough for a conventional YA novel to express the complications Collins is aiming for, and I can't imagine a conventional YA movie managing anything like the layers necessary to give the same experience the novels do.

Next: this is a world torn apart by climate change and assorted crises, but it's also a world where there seems to be only North America. There's no mention whatever or any other land masses on the planet. I'm merely reacting in this post rather than researching the questions the trilogy raised for me, but I'm tempted to go a-Googling for discussions of the trilogy's (lack of) international relations. The atmosphere is so corrupt that there's little more than hovercraft flying about, and few of those, too. One of the districts is basically an ocean-fishing colony, but there's no information about even fishing boats, let alone ships capable of moving between continents.

Panem, though, is what's left over from what was once known as North America. Early in the first novel,  the Mayor of District 12 (where Katniss is from) is required to read a brief history before the year's Hunger Games competitors are named:


He lists the disasters, the droughts, the storms, the fires, the encroaching seas that swallowed up so much of the land, the brutal war for what little sustenance remained. (HG, p.18)

So it's a climate change novel, along with everything else, which would seem to disqualify the novel's use by far-right folk looking to overthrow the celebrity-industrial complex. Their view of America would otherwise match up pretty well with the depicted Capitol, but they tend not to be strong advocates of the idea of climate change.

Finally: if it's not clear already, I really enjoyed these novels. Not enough to buy them for myself, but enough that they've badly interfered with the conference presentation I was supposed to be writing this past week, and that they've made a move INTO the presentation. It's not a huge stretch, since I'm talking about storytelling and/in environmental fiction that bumps up against science fiction (basically Douglas Coupland's Generation A), but it's not what I expected.

There's more to say, but it's just the wrong week in the wrong month for me to have finished these! I'll keep thinking, and we'll see if another post becomes necessary down the road.
Email Post
Labels: american environment fantasy fiction review speculative fiction

But I really enjoyed them, as I said. It'll be interesting to see whether a decade out, we'll be seeing people wearing Mockingjay pins and talking about childhood roots of revolutionary impulses!
August 14, 2012 at 1:43:00 PM PDT