It's going to be a great course!

At least, it's going to be great once you help me finish building it in Google Docs, and then once it's open, I hope you'll either sign up or hang out with us.

In January 2014, I'll be teaching at UVic a section of English 478, Special Studies in Literature and Environment. It's one of our department's "variable-content" courses, which means that the same themes or texts can't be addressed in any three-year window. This coming year, we're going to be talking about fears of human extinction in an SF-heavy version of 478 called "The End of the Human."

When I proposed the course, I had some ideas about where to take the course, and about what books I might want to read with the course's students, but I always knew that I wanted to let the course evolve. This post is the first step in building a learning community in and around "The End of the Human," within our Environmental Humanities research group. Let me give you some details, for background, and at the bottom I'll post a link to Google Docs that you can edit yourself.


Calendar: "A study of fictional representations of human extinction, primarily in science fiction and film, emphasizing contemporary discourses of crisis, collapse, and apocalypse. Considers the alternative responses of hope and despair, resistance and stoicism. Connects literary studies with such disciplines as political science, cultural geography and environmental studies."

Course Guide: "The near-extinction of humanity has been depicted in past eras, though this idea has taken on greater urgency in our time. Over the last two decades, anxieties about human extinction have been represented regularly in graphic novels like Y: The Last Man; films like I Am Legend; and novels like Atwood's Oryx and Crake, McCarthy's The Road, or Mitchell's Cloud Atlas, many of which have also been released as films. The threat of extinction imagined by these works has come from numerous causes, too, most often from disease but also from nuclear war, asteroids, and technological advances gone wrong (especially genetic manipulation). What is it about our contemporary condition that makes stories and theories of humanity's end so compelling – and what can we learn from extinction fiction as we head into an intensifying period of climate change?"

Extra Background
At bottom, I'm not interested in teaching this course as a conventional lecture plus discussions. As such, I offered to start with double the usual class size; to allow all waitlisted students, if there are any, to enroll in the course; and to integrate the course with a Continuing Studies offering.

Similarly, I'm not keen on grading nothing as conventional as several dozen essays of literary criticism, so I proposed allowing digital or multimedia projects for one of the assignments. As time has gone on, I'm thinking about requiring students to research possible scenarios for human extinction, as one way of encouraging students to involve in this course their expertise from outside English: climate change, nuclear fallout, genetically modified organisms, biological warfare, and so on.

Talk to me in the comments area about assignments, but I'd LOVE to read some papers by pre-med students about epidemic-style apocalypse texts (like George Stewart's Earth Abides, or the 1995 movie Outbreak), or by biology students about the portrayal of genetic experimentation in Atwood's MaddAddam trilogy or the 2009 movie Splice. 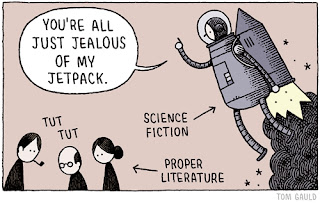 Finally, I had to propose a list of possible texts, but I don't have to order the texts until the fall. Here's that original list, six novels first and then three theory texts to draw from, but I'm hoping readers will visit Google Docs to suggest better options:
Terrible choices, all of them, clearly. Help me out in my Google Docs list! Save my students!
Email Post
Labels: ENGL 478 environment fiction UVic

Ashley Churchill said…
I hope to take this course as an elective for my double major in Geography and Environmental Studies.

Have you heard of the book "Shadows Cast by Stars" by Catherine Knutsson? She is a Metis author living on Vancouver Island, and the island in the book is based on the Island. It is written for teens, mind you.

I hope you're able to use ENGL 478 as an elective: I've had several students use previous versions of this course within their ES degree, so thanks for reminding me to try to make it official this time as well.

ES students tend to find lots to do and to think about in 478, and I've always appreciated their contributions. It's an English course, but it's some other kinds of courses at the same time, so there's meant to be virtually no intimidation factor for students from outside English. This year, in particular, I want students to feel free to skew the course heavily toward their home subject areas; I'd be delighted, for example, to get a hardcore biology paper on the genetics of an Atwood novel (if we include one, that is!).

Shadows Cast by Stars, I haven't read, though I've heard of it. There's so, so much that's exciting to read that'd fit within the loose confines of this course, that I can't even tell you how many novels I regret failing to get around to! Should I move this one toward the top of my reading stack?
June 20, 2013 at 10:17:00 PM PDT

Robin Stevenson said…
This sounds fabulous. I'm not a UVIC student but if I was, I'd be all over this. Great reading list too... Hey, another one you might like if you haven't already read it: The First Century after Beatrice, by Amin Maalouf. Have fun with this course...
June 21, 2013 at 1:50:00 PM PDT

Anonymous said…
Some excellent reads which focus on characters navigating their way through the hardships of a post-apocalyptic landscape are Justin Cronin's The Passage and The Twelve, as well as Stephen King's The Stand (though that may be too long and packed with material to fully discuss it in a one-term class). Cheers!
September 15, 2013 at 10:38:00 PM PDT

Simone McFee said…
Cannot recommend On The Beach enough, although in retrospect my mother reading it to me as an eight-year-old was not healthy for my young psychological development. Unfortunately I'm not hugely well-versed in the apocalyptic genre, but I'm familiar with all of the books on your list, and they are all good selections. I've also heard great things about Dies The Fire by S.M. Stirling.

richard said…
Sydney - indeed we will be looking at one or more movies, though I was thinking we'd want to look at movie and book versions of the same story (like The Road or Children of Men).

Simone - glad to hear from you. Your mother's reading choices explain so many things, and I'll have to look up Dies the Fire!