Let me be blunt: Andrew Pyper's The Killing Circle is the most horrible book I've ever loved reading. 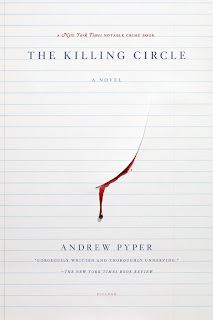 A delicate flower, is what I am, so I'm not used to reading in any detail about murders, and I've got little enduring interest in exploring other people's evocations of stultifying fear and paranoia. (Sell crazy someplace else, as they say, because we're full up here.) The narrator and many characters in Pyper's novel are depressing at best, reflective of either a society or a species in what may be permanent decline, with corruption or depravity always an immediate possibility, and why do I want proof that someone else thinks the same way I do?

Because it's an incredibly, terribly gripping story. I woke up too early on Father's Day, and read from before 6:30 until after 8:00, then stole some time during the day, and finished it before bed the same day -- shameful, I know, and if you've read the book, you'll know just how inappropriate a book it is for Father's Day reading, but even for a confirmed book addict, I was genuinely surprised at how difficult it was to stop reading.

Thing is, I also feel like there's precious little I can write about the book that won't give away something good, that you'll need to be surprised by as you enjoy your way through this delightfully evil tome (a phrase, incidentally, that Google no doubt wrongly claims has never before been posted online). The novel opens with its narrator sliding out of a book critic's job with a major newspaper, some years after the death of his wife, living weepily with his young son and trying to become a writer like he meant to before becoming a critic: beyond that, you're going to have to read the book (or some cheap review that gives away the goods unfairly!).

I'm guessing that some of the other book club members may feel similarly about the violence and the fear, but you know, this book's just worth the pain. At times, it's even funny, like when the narrator describes readers as "the last floral-skirted and corduroyed, canvas bag-clutching defenders of civilization" (p139). Actually, Pyper scatters easter eggs throughout for literature fans interesting in thinking about, or sniping at, some of the pretensions of readers and critics, especially in Canada, and it's kind of worth staying just for those.

Well, for a certifiable book nerd, anyway, and why would a person resist the label, anyway? You're hear reading blogged book reviews: be proud, oh corduroyed and/or floral-skirted defender of civilization!

But seriously: read the book. It's horrible. You're going to bury yourself in it, and enjoy it in spite of yourself.
Email Post
Labels: book club canadian fiction review